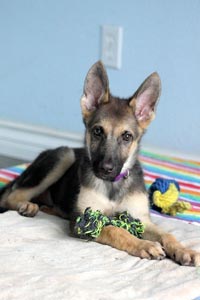 With her giant German shepherd puppy ears, Kaya immediately wiggled her way into everyone’s hearts at the Redlands Animal Shelter in California. Found on the street emaciated and constantly vomiting, she  was in trouble. Her rescuers quickly began working on a plan to get her the medical care she clearly needed.

Luckily, the city shelter is supported in multiple ways by the nonprofit group Redlands Friends of Shelter Animals, which found a veterinarian who determined Kaya couldn’t keep food down because of a condition called megaesophagus. A vessel near her heart was constricting her esophagus, making it impossible for her to swallow normally. Kaya’s particular type of megaesophagus is one of the few that’s potentially correctable through surgery. That was the good news. The bad news was that the cost for such a surgery is about $6,000, and expensive specialty surgery for puppies isn’t in the Redlands city budget. However, Redlands Friends of Shelter Animals knew where to turn for help.

Best Friends to the rescue

Since the Redlands group is a Best Friends Network partner, it is eligible for various types of assistance from Best Friends. The Best Friends No More Homeless Pets Network is a program that works with rescue organizations and municipal shelters across the country to end the killing of dogs and cats in our nation’s shelters. When network specialist Diane Young received the email about Kaya’s case, she set the wheels in motion to make it possible for her to have that costly surgery and the recuperative care that goes with it. Although Kaya already had a foster home, when she was ready, she’d need a special type of forever home.

In short order, Kaya’s once-bleak outlook turned around. Volunteers committed to fostering her until she was ready to go home. Coastal German Shepherd Rescue (also a Best Friends network partner) stepped up and agreed to take Kaya into their organization and eventually find her a home. In addition, Kaya’s other immediate need also was taken care of. She could have the surgery done by the highly skilled clinic staff at Best Friends Animal Sanctuary in southern Utah. 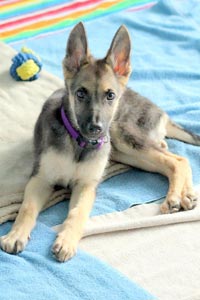 Within a month of rescue, Kaya was on her way to receiving lifesaving medical treatment. Best Friends veterinarians performed the surgery and Kaya came through like a champ. The medical director at the Sanctuary, Dr. Mike Dix, says: “The prognosis for a return to normal function is fair, but the prognosis for a good manageable level of function is great, as Kaya’s been doing very well since surgery.”

She’ll likely need to eat in an upright position for the rest of her life, but aside from that, she has a great chance of being a normal, healthy dog. “Kaya is a sweet dog and I am glad we could help her out,” says Dr. Mike.  “I hope she continues to do well and thrive as time goes on.”

Of course, Kaya doesn’t know there’s anything wrong with her. She knows that she’s “special,” but not “special needs.” “Kaya has a huge personality. She’s very affectionate and acts just like a typical German shepherd — smart and outgoing,” says Stacey Turnpaugh, the person who’s fostering her.

The key to Kaya’s future wasn’t just one person or one organization. It was everyone pitching in. She’s proof that when people work together, even the most challenging situations can have a happy ending.

Learn more about how Best Friends helps pets like Kaya in shelters and rescue groups across the country.