Image
Caregivers socialize a painfully shy dog by having her participate in a shy dog class, taking her on outings, and using touch to calm her.
By Christelle L. Del Prete 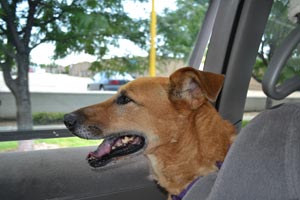 It takes some dogs a while to find the perfect home. Muirinn, who is painfully shy and easily frightened by nature, is one of those dogs.

Dogtown caregivers believed in the pretty shepherd mix, and worked hard to help her prepare for the perfect home they knew she would find one day. They took her for car rides until she began to look forward to riding to the creek. They took her to Dogtown Headquarters until she got brave enough to interact with staff members and volunteers there. And they brought her to shy dog class, where she learned to accept yummy treats from volunteers and even became a role model for other dogs.

Caregivers also did lots of “touch work” with Muirinn, getting her accustomed to being petted and brushed. Because she had learned a lot not just from people, but also from confident dogs at the Sanctuary, they always paired her up with an outgoing roommate. Muirinn’s life in Dogtown was quite full. Still, she deserved a family with whom she could spend her golden years. 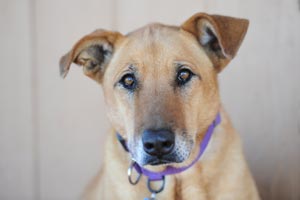 Kathleen Pecor, while thumbing through an issue of Best Friends magazine, saw a picture of Muirinn and was struck by her sweet, soulful eyes. Kathleen thought Muirinn might be a good companion for her 10-year-old dog, Riley. The two dogs were roughly the same age and seemed like a good match.

But just as Kathleen decided to plan a trip to the Sanctuary to meet Muirinn, Riley, who’d been successfully undergoing chemotherapy treatments, took a turn for the worse. The family, devastated by her loss, needed time to grieve. But about a month later Kathleen, her husband Don, and daughters Jamie and Kacie contacted Best Friends about Muirinn.

Kathleen and Jamie decided to travel to the Sanctuary to meet her and see if she might be a good fit. Muirinn won their hearts by taking treats from them. “It was great. They immediately bonded with her during that first meeting,” says Dogtown caregiver Paul Lindley.

A momentous day for a shy dog

A few weeks later, the whole Pecor family came to the Sanctuary to bring Muirinn home. It was a momentous day. Kathleen’s eyes watered with tears of joy as Paul brought their new family member out. Before taking her for a walk on one of the many trails in Dogtown, the family sat in the shade with Muirinn. Kacie, gently stroking Muirinn’s side, said: “She's a really sweet dog. Mom’s very excited about bringing her home and giving her that home experience."

Of course, the family also knows there’s some hard work in store. Muirinn will need time to establish trust and acclimate to their home. But she’s ready. 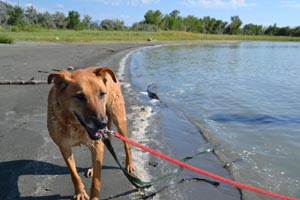 Helping a shy dog in her new home

Adoption specialist Nancy Van Buskirk explains that the Pecors understand Muirinn’s personality, and they’re prepared for her shyness. “They’re not expecting a fast turnaround, but are totally willing to let her be who she wants to be.”

A few weeks after her adoption, Muirinn is learning the routine in her new home and is making progress. Says Kathleen: “Muirinn has found her comfort zones within our home, and we are trying to make her feel as safe and secure as possible. She loves going for walks, and to the bay, and also playing in her wading pool in the backyard.”

“We always knew she had the potential to be successful in a home,” Paul says. “She came as far as she could at the Sanctuary and has never been more ready for this.”

Photos by Molly Wald and courtesy of Kathleen Pecor