Image
Timid dog slowly learns to trust and come out of her shell (shy dog class helps), and she finds the perfect home to help her even more.
By Kelli Harmon 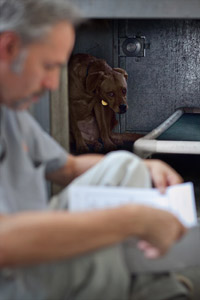 When Angela Rovetto, lead pet caregiver at Best Friends’ NKLA Pet Adoption Center in Los Angeles, first met Cinnamon the dog, she explains, “She was wide-eyed in absolute terror. Just being in an open space was too much for her.” The thing with shy dogs is that there is no quick fix. Helping them conquer their fears takes time, patience, expertise and love. Luckily for Cinnamon, Best Friends has those in spades.

While one of Best Friends’ goals in Los Angeles is to help as many animals get out of the shelter and into good homes as quickly as possible, some, like Cinnamon, need more time for just the right person to come along and choose them. Instead of greeting potential adopters and practically begging them to take her home, Cinnamon preferred to wedge herself under the bed in her kennel.

Staff worked to help Cinnamon understand that she was safe and loved and that people are good. In fact, Cinnamon was the inspiration for a class at the adoption center just for shy dogs. With caring and patience, Cinnamon began to trust in tiny baby steps — until caregivers found out what makes Cinnamon the happiest dog in the world: playing with other dogs.

While Cinnamon spent most of her time looking like she wished a hole would open in the floor to swallow her up, she turned into a silly, wiggling, play-bowing goofball when let loose with another dog. Her serious, frowny face, with its distinctive underbite, lit up as she grabbed a tennis ball, dropping it in front of other dogs in hopes of a game of chase. Angela says, “Her affinity for other dogs is how we reached Cinnamon to show her the world can be fun and great.” 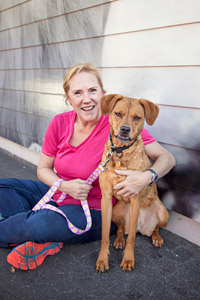 While Cinnamon slowly began to trust, she had a long way to go before she’d be seen as “normal” — if ever. Angela says, “Cinnamon needed a home with someone who’d be OK going at her pace and not have expectations of how they want her to be, or try to ‘fix’ her. She wasn’t broken, just different, and she’ll grow and learn about the world with a patient, confident and loving guide.”

Then one day, that confident, loving guide arrived. Angela Brown had recently visited Best Friends Animal Sanctuary in Kanab, Utah, where she worked with a shy dog. When she got back home to L.A., she went to the NKLA Pet Adoption Center and met Cinnamon. Angela says, “After getting to know a shy dog at the Sanctuary, the idea of adopting one wasn’t all that scary to me.” She’s also in the final stages of certification as a dog trainer, so she’s working with a mentor trainer.

Angela saw Cinnamon in a different light than other potential adopters had. She says, “I thought she was the cutest thing on earth, and I wanted to help her little heart not be so stressed out and afraid.” After talking at length with Angela about what to expect from Cinnamon, she decided to adopt her.

Cinnamon is settling in faster than anyone could have hoped for. Angela says, “She’s still afraid of a lot of things — crows in the yard, the house settling — but when she snuggles up next to me, who cares if she’s afraid of her shadow?” Sometimes it takes a while for just the right person to come along and find his or her perfect pet. Sometimes it’s a pet like Cinnamon who, while perhaps not perfect, is just right for her new family.

Learn more about Best Friends’ work in Los Angeles, including the pets available for adoption.