Image
When Sadie first came to Best Friends, she was so timid she wouldn't let most people near her, but today she's blossomed into a confident dog.
By Drew Schott

When Sadie first came to Best Friends in Atlanta, the three-year-old Labrador mix was so shy she wouldn’t let most people near her, let alone pet her. But the team wasn’t too worried. They knew that with a little time and a lot of patience, Sadie would learn that the world wasn’t such a scary place after all.

It helps to have a friend in your corner when facing your fears, and Sadie made plenty of them at Best Friends. Although she was often very afraid, it was easy to see that behind all those nerves was a sweet, loving and confident dog.

Going slowly: the key to helping a shy dog

One person who saw beyond Sadie’s fearful exterior was caregiver Kylie Burkes, who met Sadie her very first day on the job in Atlanta. Kylie made an instant connection with Sadie and decided she’d be her champion, no matter how long it took or how hard it was to gain her trust.

One of the keys to gaining that trust was to take things slowly. Kylie started by simply bringing Sadie her food when it was feeding time. Eventually, Sadie was OK with being taken for walks, and when she allowed Kylie to put her leash on and take it off, Kylie knew they were making progress.

The real turning point came when Sadie started showing affection toward Kylie. One time, Kylie came into the kennel and Sadie immediately rolled over and showed her belly. “She got used to me,” Kylie says. “She loved me and that was really great.”

Eventually, more people witnessed Sadie coming out of her shell with other dogs. During weekly play groups, Sadie loved running around with energetic puppies. That’s when they decided to move Sadie into a kennel area with other dogs, where she thrived. 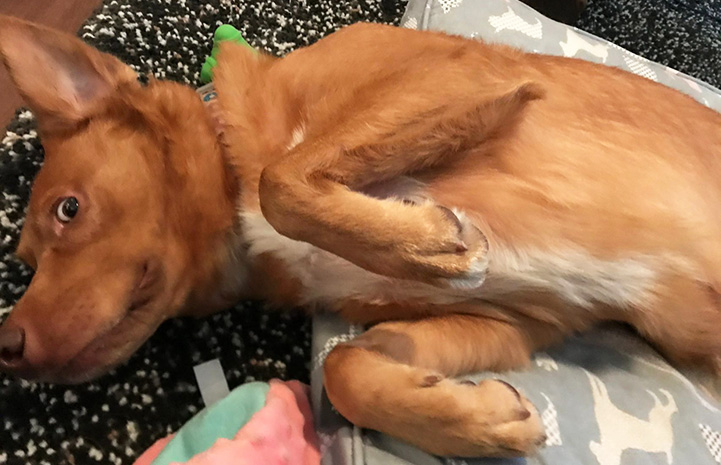 Gaining confidence in a foster home

When the center closed due to COVID-19 stay-at-home orders, Kylie fostered Sadie so she could help her gain confidence while at home. It didn’t take long for her to get cozy at Kylie’s place, but then, how could she not? Kylie set up a big dog crate for her, but she had a big couch to sleep on, too.

Sadie enjoyed exploring Kylie’s neighborhood on their long walks together. “She’s the perfect house dog,” says Kylie. “She was low energy and she didn't really want to play. She wanted to sleep or she wanted chest scratches.”

Sadie also got comfortable wearing a muzzle, which is a helpful tool for dogs who tend to be afraid. She also practiced keeping calm around strangers on walks. Whenever Sadie didn’t react when a stranger was near, she was rewarded with a treat. 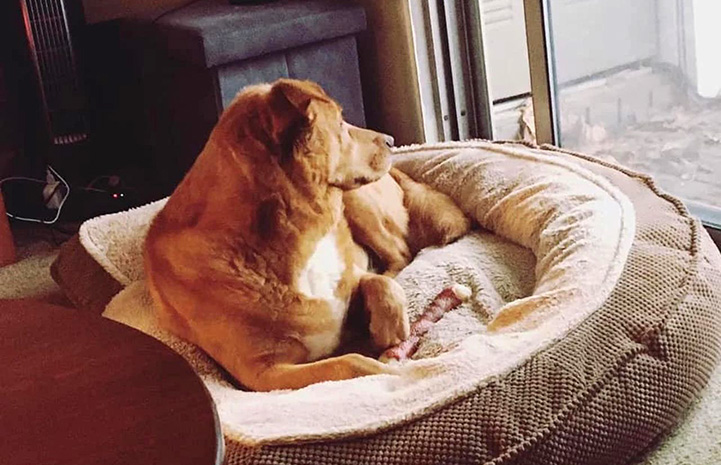 Adopter sees beyond a dog’s shyness 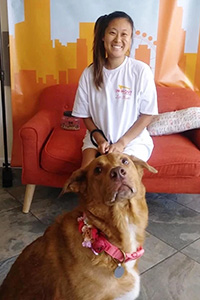 Angela was looking for a dog to adopt when she came across Sadie’s profile on the Best Friends website. She submitted an application and was contacted by Kylie the very next day. She told Angela all about Sadie’s journey and how hard she worked to overcome her fears.

Kylie also let Angela know that Sadie is still often very timid, especially around people she doesn’t know. Angela didn’t mind one bit. Instead, she came up with a plan: She would visit Sadie until the dog understood that she was a friend.

Angela quickly fell in love with Sadie and felt for how she’d overcome so much with the help of people who saw the confidence behind her shy exterior. Angela saw it, too, and adopted her. 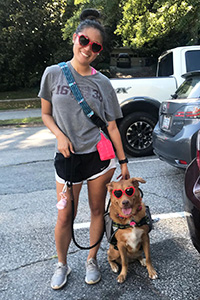 Today Sadie has mastered the art of relaxation. She loves sleeping on one of her four dog beds (especially the one with a cheetah print cover). She also enjoys playing with her dinosaur toy. In fact, she loves it so much that whenever Angela needs to move her anywhere, she picks up the dinosaur and Sadie follows.

Sadie loves to explore, too. One of Angela’s favorite places to take Sadie is a trail that leads to a koi pond. Angela says Sadie’s reaction to the little fish is priceless. “Sadie is both fascinated by and terrified of the koi because they splash and she’s freaked out,” Angels says. “But then she'll go back down there to investigate.”

That’s the sort of reaction that shows how far she’s come. These days, she doesn’t let fear stand in her way of happiness.

On top of all the fun they have, Sadie is becoming a calmer dog. Angela recently taught Sadie how to heel during walks outside and inside the apartment. And she’s also getting over some of the fears she had at Best Friends. According to Angela, Sadie lets some strangers pet her, and she loves car rides “because she knows it means we’re going somewhere fun.”

Since adopting Sadie two months ago, Angela is confident that it was one of the best decisions she has ever made. “She gives me a sense of purpose,” says Angela. “She validates me and what I'm doing with my life. We're best friends and I love being with her.”

[5 dogs who changed their adopters lives]

[Weekend away makes a world of difference for energetic young dog]