Image
Labrador mix, who was picked up as a stray, finds perfect forever family. She'd been overlooked previously because of her shyness.
By Denise LeBeau

The Labrador mix wandered the streets in a northern Utah town until she was picked up and brought to West Valley City Animal Services. Her graying muzzle showed she wasn’t a pup anymore, but her longing brown eyes and honey-colored coat endeared her to the shelter’s staff.

However, months went by with no adopters showing interest, so the shelter made arrangements for Honey to go to the Best Friends Pet Adoption Center in Salt Lake City. The center helps surrounding municipal shelters find homes for more pets by showcasing them in a boutique-type atmosphere. Since it opened in July of 2013, friendly animals by the hundreds have flown into homes thanks to the center. Honey bucked that trend, though. She’s a loveable dog, but her shyness turned off would-be adopters.

Erin Olsen, adoption coordinator at Best Friends–Utah, was Honey’s constant champion. She would steer folks to Honey’s kennel to see the lovely dog, and encourage people to take her to the meet-and-greet room for a little one-on-one time. “Unfortunately, we discovered Honey wasn’t so confident meeting new people,” says Erin. “She would become very shy and duck her head when someone tried to pet her.”

Honey couldn’t help how she felt, but her behavior wasn’t attractive to potential adopters. Still, staffers at the center saw so much good in Honey, and they weren’t about to give up on her.

Falling in love with an overlooked dog 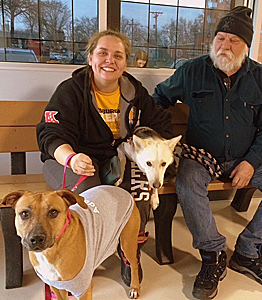 For some time, truck drivers Heather and James Savee had wanted to add another dog to their family. Their husky, Leia, was lonely after her canine siblings moved away. The Savees take Leia everywhere with them and they needed a new traveling buddy to round out their happy pack.

In early January, Heather went to the pet adoption center. She walked by a few kennels and then saw a brown dog who’d been overlooked by so many others. “Honey stopped me dead in my tracks. I looked straight into her eyes, and then I started to cry,” says Heather. “She was older than I was looking for, but I couldn’t turn away from her.”

Canine meet and greet with kisses

The big moment had the staff on pins and needles. Heather understood that Honey could be shy during the get-acquainted session. But when Honey walked into the room, she surprised everyone.

“Honey put her paws on my shoulders and started to lick my face,” says Heather. As though she’d finally realized what she needed to do to find a home, Honey wasn’t so shy after all. The next hurdle was Leia. How would the two get along? It turned out there was no cause for concern. “Leia, who can be standoffish, bonded right away with Honey,” says Heather. “The two fell immediately in love.”

Getting along beautifully with family's other pets

Since she went home, Honey’s been all over the country with her new family. Heather and James schedule adventures during their long hauls that focus on dog-centric activities. Heather plans their trips, using a guide to dog-friendly hotels, cafes and parks. 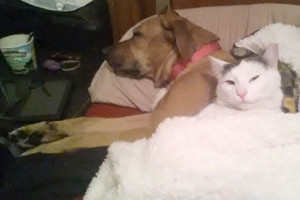 “Honey loves to go on hikes and splash in water,” says Heather. “She’s also perfect in every situation. She’s great with new people and other dogs. It’s like she was made for our family.” Honey also gets along great with her new feline siblings, Spoticus, Bobcat and Mister T. Heather and James live on eight acres that include horses, chickens and 16 free-roaming cats who showed up all on their own (and who Heather has had spayed or neutered). But even with acres to roam, Honey’s favorite spot is on the couch, curled up with the kitties.

“I can’t imagine life without Honey. Everything about her makes me smile, from the way she wags her whole body to the way she stares at my husband for hours while he’s sleeping,” says Heather. “She is just so special.”

After six months of waiting for a family, Honey is finally home.

To help more animals like Honey go from homeless to home, become a Best Friends member.

Find an adoptable companion animal near you.