Image
How Morgan, a 10-year-old shy cat in Los Angeles landed a home with a woman, her 93-year-old mom and two fellow senior pets
By Nicole Hamilton

When Morgan was at the Best Friends Lifesaving Center in Los Angeles, she wasn’t the kind of cat to stand at the front of her kitty condo ready to make friends with anyone and everyone who walked by.

Don’t get us wrong. Morgan absolutely loves people. It’s just that she prefers to take her time getting to know you. A senior introvert, she was shy and timid at the center around people she didn’t know well, including potential adopters. 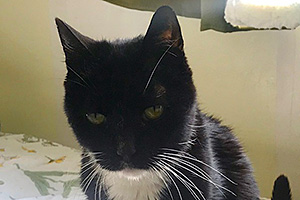 Meredith Hazan, cat program coordinator for Best Friends in Los Angeles, says timid cats like Morgan get immediate help when they first arrive at the center. Shy cats stay in a quiet area away from the hustle and bustle until they have acclimated to their new space. Helping cats feel more comfortable around people can take a while. And because every cat is different, staff and volunteers take a mostly hands-off approach at first.

“We can make progress with just a soothing voice and slow blinks,” says Meredith. Slow blinking is one way cats communicate with each other, and it can work wonders when people use it, too.

When scared cats first arrive, the only time staff members touch them is at feeding time, and even then only a little. A well-timed stroke, just as a bowl of food is being set down, helps cats associate touch with something positive.

Play is also a key to confidence building, so the team helps cats engage their natural predatory instincts with wand toys. When cats feel confident in that way, says Meredith, they are more likely to open up in other ways.

Time and patience are the last ingredients for helping shy cats. “Often as humans we are impatient with animals because we're so eager for their love and attention,” says Meredith. “With shy cats, we have to be as unselfish as possible so they're able to open up and trust us in their own time.”

Foster home reveals another side of Morgan

Time in a foster home can help shy cats feel better, too. After two weeks in a foster home, the little black-and-white cat showed a different side by opening up once she felt comfortable in her new surroundings. She was loving, friendly and loved nothing more than a good scratching session. Like so many pets who lose their homes, they’re understandably overwhelmed and scared in a shelter environment.

Notes taken while pets are in a foster home can help adopters get a better idea of how they might be in adoptive homes. While the kitty in front of them at the center may be hiding, it could be a whole different story in a home.

There are so many ways that pets are supported for adoption and so much work done by so many, that when adoption day finally comes, it’s cause for celebration. It just takes the right person to come along. 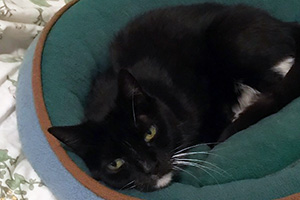 Maureen Moore came to the Best Friends Lifesaving Center with a clear idea about the kind of kitty she wanted to adopt. First, it would be an older cat. Maureen definitely didn’t want a kitten — in fact, the older the better.

She also preferred a smaller black or tuxedo kitty (her favorite colors). And she needed a quiet, kind and gentle cat around her 93-year-old mother and her senior dog and cat. Morgan was just the cat Maureen needed.

Maureen met a few cats that she liked that day, but it was Morgan who won her heart. She brought her home and designated her bedroom as Morgan’s safe place where she could feel secure. She’s giving her new kitty time to settle in, and Morgan is thriving because of it.

Maureen says Morgan is still building confidence and prefers to stay in the bedroom, but she’s getting more comfortable every day. And she’s relieved that Morgan is very happy to be around her mom.

Sometimes the cat chooses you

“It was one of those adoptions where it felt like a perfect fit,” says Tuba Agbas, adoption specialist for Best Friends. “Now she’s living her golden senior years in a nice quiet home with another sweet senior cat friend.”

While Maureen’s giving Morgan time by keeping her room quiet, she doesn’t tippy-toe around the house. Now that Morgan is getting braver, Maureen feels it’s good for her to hear what’s going on around her.

She also feels that Baby, her other senior kitty, might be helping Morgan feel more comfortable so she can come out her out of her shell. “I’m willing to give Morgan all the time she needs to get used to Baby,” says Maureen, “but I think eventually they will become good friends.”

As for adopting a senior cat, Maureen says part of her motivation stemmed from knowing that older cats sometimes have a harder time finding a home than younger cats. It also came down to reality.

“I’ve had kittens and I really have no desire to do that again,” says Maureen, who will be retiring soon. When that day comes, the only thing on the agenda is to relax and Morgan will be right there with her. A kitten, on the other hand, might not be so apt to take it easy.