Shy shepherd and bull terrier mix gets a job

Image
Shy white shepherd and bull terrier mix gets a job as a greeter at the the Best Friends Welcome Center and begins to shine.
By Christelle L. Del Prete 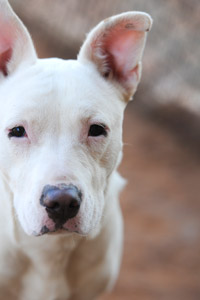 With her ears standing erect and straining to pick up sound, Jewel, a white shepherd/bull terrier mix, peers cautiously around the Best Friends Animal Sanctuary Welcome Center desk. She is trying to decide whether or not to come out and greet Romeo, a senior golden retriever who came to visit the Sanctuary with his person.

For a few moments, Romeo (who, despite being 100 pounds, is usually afraid of other dogs) stands facing Jewel with his tail wagging. Eventually, Jewel figures out that Romeo is harmless, and emerges from her hiding spot. She stands a few feet back, sniffing with a friendly and curious air. When Romeo leaves, she returns to the soft bed behind the desk with a look that says, "Hey, I did it!"

This is Jewel's fifth Tuesday as a volunteer greeter in the Welcome Center, and she's come a long way. In July of 2012, she was picked up as a stray by animal control in Shelby, Tennessee. Though she is really sweet, and only about two years old, she did not do well in the shelter there; no one wanted to adopt her because of her extreme shyness. But Jewel had a good reason to be shy, as she is at least partially deaf. She didn't know what was going on, and nobody understood her well enough to try to explain it.

All too often, local shelters don't have the resources to work with shy dogs like Jewel, so they deem them unadoptable. But here at the Sanctuary, Dogtown Heights caregivers Shauna Saling and Kathy Moore are putting lots of effort into communicating with her and making her feel comfortable. Shauna says Jewel pays close attention to people's body language, and Kathy has been teaching her to respond to hand signals.

A dog with a job to do 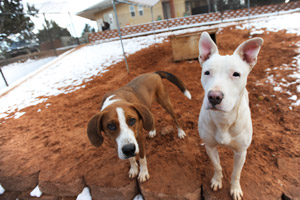 Though she still acts scared, and won't approach new people in her run, by the third Tuesday, Jewel had started to catch on to her new routine. She perked up when she saw the van belonging to tour guide Raven Chiong, and began whining in anticipation when Raven stepped out of it. And, though she was once afraid to get into cars, she leapt into the vehicle with only a slight hesitation. Jewel seemed to know that she had a job to do, and she appeared excited about it.

Jewel was chosen for this post precisely because of her shyness. Raven says that shy dogs have no choice but to interact with people at the Welcome Center because everyone sees them and wants to meet them. "It's great to have dogs like Jewel here because we can really see the changes in them," she explains. They become calmer and more trusting. As for Jewel herself, Raven says she is one of the calmest dogs they have ever had there.

Though she hasn't lost her shyness yet, Raven said that Jewel had already made progress by week three, and that she is "highly adoptable." Tour guide Kelly Cunningham agrees that she, too, has noticed small improvements each week. Jewel is usually on high alert upon arrival at the Welcome Center, but she settles in and becomes more and more relaxed throughout the day. Her responses to Romeo and to Raven's little Beagle mix, Dulcie, show that she is good with other dogs. And, after a brief, quiet introduction to a new person, Jewel sighs contentedly and turns on her side for a belly rub.

To adopt Jewel or another dog, go to the Adopt a Pet section of our website.