Siamese kittens with unusual challenges get leg up in life

Image
Two Siamese baby kittens were born with a genetic defect -- twisted legs -- but this isn't slowing them down. They have been adopted.
By Christelle L. Del Prete

Who needs four perfect-looking legs when you have a sibling to lean on and more than enough strength and determination to go (and to get) around? Siamese kitten siblings Cahill and Cordell were born with twisted legs. That makes it hard for them to move around as quickly and easily as other cats. But it has never held them back. So far in the game of life, they’ve come out miles ahead of the crowd. 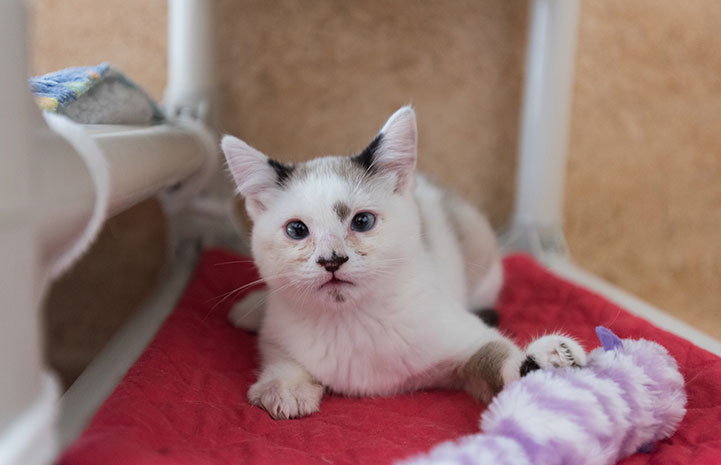 The adorable litter mates were found in a local community, and when people saw that the kittens were a bit different, they worried that they might not fare well living outdoors without full use of all their legs. Community cats (aka stray cats) and kittens can live safely outdoors if they are spayed or neutered, vaccinated and have a caregiver looking after them, but Cahill and Cordell may not have been OK living outdoors, because they couldn’t get around as well as other kittens. Also, they were only about two months old at the time, and no one knew whether they’d be able to walk properly as they grew.

While Cahill has one back leg that is short and crooked, her other three legs are normal. But her brother’s birth defects are a little more pronounced, making it harder for him to get around. Both Cordell’s front legs are malformed, so he uses his elbow to move about, and one of his back legs didn’t form correctly either, so his paw is upside down.

Twisted legs haven’t crippled these little kittens, though. If anything, being different has given them a leg up in life. After being rescued, the siblings started their new lives in a Best Friends foster home. Like most healthy kittens, they were hilarious — and a handful. While they can't jump up on things, they sure can climb. Kuranda beds and cat shelving really aren’t a problem for them. And they always make people smile when they come trotting noisily up with their irregular little strides.

But the sweetest, most endearing thing about Cahill and Cordell is how they lean on each other. During the short time they lived at Cat World, after leaving their foster home, the siblings could often be found snuggling up with each other in a cat bed or playing their own version of “tag.” Cahill would hide in a cardboard box and start spinning around, chasing her tail. Then Cordell would come lumbering over and jump in to join her. The two would tumble around in the box for a few seconds, and then two pairs of pale blue eyes would peer out of the box together. 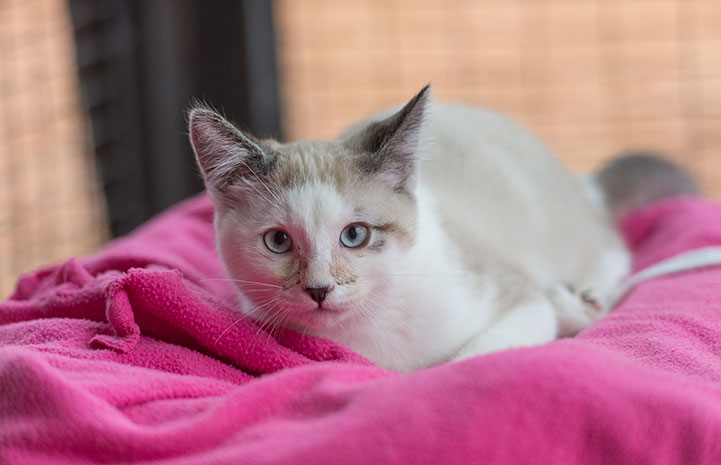 Kittens with special challenges and opportunities

Whatever the two were doing together, they seemed to say, "We've got this." That didn’t mean that the siblings weren’t independent enough to be adopted separately. They were growing up strong and sure and would have done just fine had they ended up in different homes. But instead, Cahill and Cordell got something even better.

An adopter who has a soft spot for kitties with special challenges was looking for some feline companions. Cahill and Cordell captured her heart, and she offered them a perfect happy ending: a home to grow up in together. 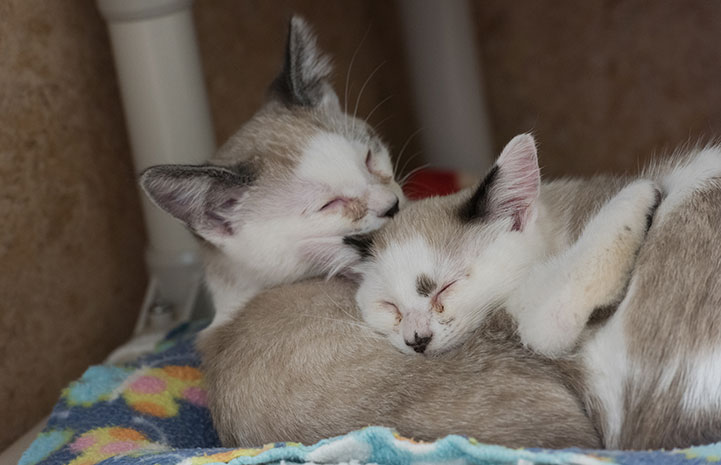