Sibling cats don't let their physical challenges slow them down

Image
Two affectionate sibling cats who were born with shorter-than-normal forelegs that also are a bit misshapen don't let their challenges slow them down.
By Christelle L. Del Prete

If you happen to catch a quick glimpse of Dina (stretched out in her bed atop a plush cat tree) and of Beazley (rolling around playfully in the “trunk” of the tree), you wouldn’t know that this brother-sister pair are a bit different from other cats.

Just pet Dina while she’s lying in her bed and she’ll stretch out and head-butt you like any other attention-loving cat. And Beazley won’t be able to scramble out of the tree fast enough to get some of the attention for himself. It’s not until they are standing right in front of you or moving across the room that their uniqueness becomes apparent. 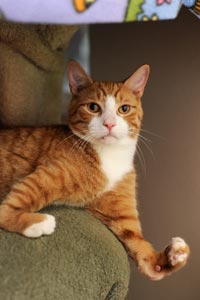 The siblings were born with shorter-than-normal forelegs that also are a bit misshapen.

That made it difficult for Beazley and Dina to find a home while they were living with a rescue organization in New Jersey. So they were flown out to the Sanctuary, where being a little different isn’t just embraced, but celebrated, and where they will have the best chance of finding great homes.

Young cats get along just fine despite unique walking styles

Now nearly a year old, the young cats are settling into life in the lobby of Morgaine’s, one of the areas in Cat World. Because they were born this way, what could have been a real hindrance to their mobility has never really been an issue. They just use the bodies they have to get around — and they do so surprisingly well.

Though they have significantly different walking styles, both are extremely agile. Dina, whose front legs are a little longer than her brother’s, walks on her elbows, while Beazley hops around like a kangaroo. “It's amazing how they go about it. They adapt so easily … and not much stops them,” says Cat World caregiver Denise Barbarich.

Not only can both cats jump up on and climb inside the big cat tree in the lobby of Morgaine’s, but they can also use the litter box and get around the big room just fine. Beazley, the more outgoing and curious of the two, likes to investigate everything. If there’s a stack of boxes, he’s there. And lithe little Dina can jump up on all the shelves in the outdoor cattery. 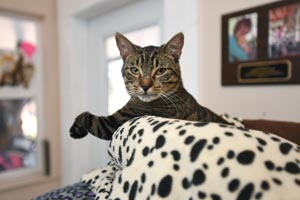 Of course, the young cats have their quiet time, too. They love to snuggle with caregivers and volunteers. Though they were both a bit hesitant when they arrived, and hid in the bathroom on their first day in Morgaine’s, Denise made sure they got lots of love and attention, and they quickly realized they were in a safe place.

Now, both cats regularly ask for attention. While Dina is a bit more demure, Beazley likes to be front and center. If he doesn’t feel people are paying enough attention to him, he’ll stand on his strong back legs and paw the air until someone notices his adorable antics.

But these two don’t have to beg for affection. In the short time they’ve been here, they’ve become a magnet for staff, visitors and volunteers alike. It seems that no one can get enough of these two endearing little cats.