Image
Best Friends helps reunite a sick stray kitten with her New York rescuer who had found the baby cat outside her Brooklyn apartment complex.
By Christina Green

If ever fate intervened to bring two souls together, it was for Jamie Charapata and Lily the kitten. And it was Best Friends that was lucky enough to help at key moments in their story.

It all began one July day when Jamie found Lily as she walked through the courtyard of her Brooklyn apartment complex, a place she almost never passes through.

Weighing less than a pound, the helpless kitten had curled into a little ball, with fleas speckling her white coat, no mom cat in sight and her life hanging in the balance. Jamie knew that the tiny tot needed help fast. So she called her vet, who referred her to Animal Care Centers of NYC, because the kitten was so small. 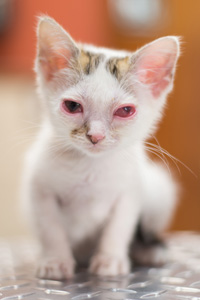 “I was really nervous because I didn’t know what they would do with her and I really wanted to adopt her,” said Jamie. “I told them I’d be calling every day for updates and as soon as she was available, I wanted her.”

True to her word, she called every day for a week, though she seldom received news other than confirming Lily remained at the shelter and was still too little to adopt.

Until one day when she called and learned that Lily had left the shelter.

As luck would have it, Lily had been spotted in the shelter by Kristi Adams, Best Friends–New York’s foster and adoption coordinator. “She was so little and sad, I really felt for her,” Kristi said. “I knew we could help her.”

Kristi took Lily along with a few other animals into the Best Friends program, but while the other pets went into available volunteer foster homes, Lily went straight to the vet. “She was very sick with an upper respiratory infection and conjunctivitis in one eye and had to stay in the intensive care unit for weeks,” Kristi said.

Jamie, too, had become sick, but she was suffering from grief. Fearing that she would never again see the little white angel who had her heart from the first moment, and worried about what might have become of her, Jamie turned to friends and family for support. Their advice: Don’t give up.

Not one to give up on love, she didn’t. It took some doing, but she worked with the shelter to track Lily down, which included calling Best Friends. Impressed with Jamie’s dedication, Best Friends staff kept her updated on all of Lily’s progress.

As the little kitten regained her health and grew big enough to be spayed, Jamie waited patiently until she could bring her home. 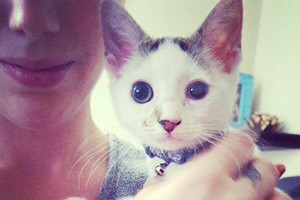 Over the course of the next few weeks, Lily’s health improved and she gained enough weight to be spayed — just in time for Best Friends’ September pop-up event.

“I knew Jamie and her boyfriend wanted Lily, and told her exactly where to find her at the event,” said Kristi. “I knew they were the right family for Lily.”

Far from the helpless ball of fur of their first encounter, this time Jamie found an active kitten playfully batting around a ball. “When I first saw Lily at the event, I almost didn’t recognize her,” Jamie says. “She was so healthy and active. Walking out of there, I was trying so hard not to cry.”

Best Friends couldn’t ask for a better outcome for Lily. “After the adoption, Jamie sent me a text with all of the goodies they bought her,” Kristi said. “Let’s just say she’s one spoiled little girl.”

Truth be told, Best Friends wouldn’t want it any other way. Lily fits into Jamie’s life (which includes her boyfriend Matthew, and their eight year-old cat, Lion-O) like she’s always been a part of it. Though it had been a long, emotional journey, Jamie’s persistence paid off — along with a little help from fate.

To bring hope and healing to more animals like Lily, consider making a gift today.

Learn more about how Best Friends is working to help New York get closer to no-kill.