Image
Two canine tripod pals find love with a man and his dog.
By Jennifer Hayes

No one definitively knows how Sasha and Scruffy got hurt. What is known is that both needed help.

They turned up at San Antonio's municipal shelter, Animal Care Services (ACS), separately, but they both had something in common - badly injured legs.

As a rule, ACS does not treat injuries. Historically, a broken leg meant a death sentence. However, now when animals with treatable medical conditions or injuries show up at the shelter, they are routinely saved through the San Antonio Pets Alive (SAPA) Positive Alternatives to Shelter Surrender (PASS) program.

It started in January 2012 when the city of San Antonio and SAPA signed a contract designed to save lives. On board as a No More Homeless Pets Network partner, SAPA receives both guidance and financial support from Best Friends. And in only one year, nearly 6,000 cats and dogs, who would otherwise have been killed, were saved.

"We knew the people of San Antonio had what it takes to save lives," says Renee Nank, co-director of SAPA's all-volunteer marketing team. "It took an organized effort and approach that looked to the community for direct involvement - and they have answered the call. Our recovering animals need fosters, and we can only save them if San Antonians pitch in by providing temporary homes and donations - even small ones. They all add up."

Sasha had an injured rear leg and Scruffy an injured front leg, and thanks to public contributions, SAPA had enough money to get them treated at Animal Emergency Room. However, both damaged legs required amputation.

Staff at the veterinary hospital thought the two dogs were lonely, so put the pair together in a kennel to heal for a few weeks following their surgeries. A love connection was born, so once the dogs were recovered enough to be adopted, vet staff requested the bonded pair remain together.

Finding a home for one three-legged dog is challenge enough, but two?

In reality, it's quite easy … when the right person comes along.

Sean Collins had a blind dog as a child and says, "I kind of relate to things that are different," so the pair of tripods caught his attention when he saw them on Facebook. It was Sean who contacted the foster family to set up a meet-and-greet, but it was his own dog Zooey's reaction that sealed the deal.

Sean had been searching for months for a friend for Zooey, but she never clicked with adoptable dogs. However, when Zooey met Sasha and Scruffy at a local dog park, Sean explains, "They were instant best friends."

"I didn't really have to think about it," says Sean. "I told her that day they were the perfect match." It was love at first sight for both Sean and Zooey, so Sasha and Scruffy were adopted.

You scratch my back … 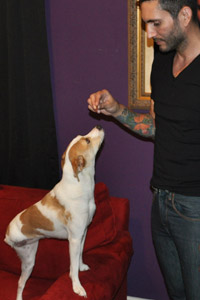 Now renamed Daisy and Duke, the two tripods fit right into the household. In fact, they all have their own established spots. When Sean sits on the couch, Duke is on the pillow above his head, Zooey is on the pillow at the end, and Daisy is on his lap. Always! And when Sean goes to sleep, Duke is at the foot of the bed, Zooey takes half of Sean's pillow, and Daisy is between his legs. Again, always! It's like they're pieces of a puzzle that fit together.

And overall, Sean has not had to make any special accommodations for the three-legged dogs. However, Sean does have one new job - itch scratcher. Since Daisy's entire back leg was removed, occasionally Sean will see her hip moving. That's when he knows she's trying to scratch. Luckily, he's just the man for the job. It's just one small way Sean returns "the amount of love and joy that they bring to me."