Image
Ando, a senior dog, overcomes 10 years of anxiety and learns that he likes people after all.
By Christelle L. Del Prete 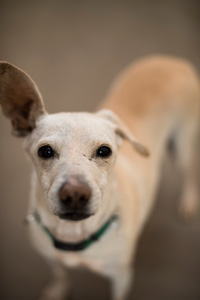 Ando spent his first decade afraid of people, but since he arrived at Best Friends, the little terrier mix has proven that he’s always had a brave and friendly personality hiding inside. He just needed the right kind of care to show it. While the little guy started out incredibly shy, he’s a whole new dog today.

The first challenge for Ando, when he arrived at Dogtown in early 2015, was to keep his anxiety in check while he got to know his caregivers. Before he could make friends, he needed to learn that people were worthy of his trust, and because he was frightened, he had to go at his own pace.

Dogtown caregivers started slowly, sitting quietly with Ando in his room and offering him food from their hands. That way, Ando felt encouraged to approach them without having to go too far out of his comfort zone.

As he became accustomed to taking food from human hands, he got to meet more and more people, since hand-feeding is something volunteers can do, too.

For the first time in his life, Ando could start to see that every time people are around, something great happens. And he’s smart, so once he figured that out his world began to change.

Making up for lost time

Ando quickly learned that new people meant he’d get lots of praise and tasty treats. As soon as he made that all-important connection, he began to build relationships faster and faster, as if making up for lost time. Hand-feeding became a familiar and fun activity for Ando, and he would eagerly accept treats from anyone.

Being handled, however, was still a challenge for him. He was really sensitive about having his head, feet and tail touched, and even though he’s small enough to be easily picked up, he wouldn’t allow it.

Again, Dogtown caregivers went slowly with Ando and worked to help him accept (and enjoy) human touch. Suddenly, getting leashed up to go for walks wasn’t so scary anymore.

As his faith in people continued to grow, Ando began walking up to his caregivers and volunteers to see if they had treats or if they wanted to take him out on the Dogtown trails. He’d come so far from the dog who once cowered as though he wished he were invisible.

One day, his caregivers brought him out of his building to greet the people on one of the Sanctuary tours. Ando was a little uncertain at first. He was in his signature stance — nose twitching, one ear standing straight up and the other sticking straight out to the side. You could almost see him thinking: Am I brave enough to try meeting all these people at once?

The answer was yes. 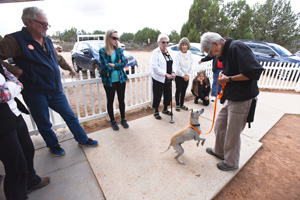 Instead of trying to run back to his room, he walked right up to that group of strangers, knowing that they wouldn’t hurt him.

He’s been greeting Sanctuary tours ever since. Now he’ll prance right up to a group of 15 complete strangers and work the crowd like he has been doing it all his life. And, while he still finds over-the-head pets a little intimidating, he’s come to relish scratches under the chin and on his backside.

Now that Ando has overcome his fears and is no longer an under-socialized dog, every day brings a new opportunity for him to expand his circle of human friends. And he’s learned that the best way to do that is to just be his brave, friendly self.