Tommy and Silly have never had much use for people. They prefer to stay far away from them, perching up in the rafters and watching the world from up high. They’ll climb down on their own terms when they want or need to, and keep a cautious distance from their caregivers.

Since that’s what makes them happy, Cat World caregivers are pleased to accommodate them. After all, these cats have had a pretty rough past. They deserve to live a life that makes them the most comfortable and happy — even if that means hanging out in the rafters full-time. 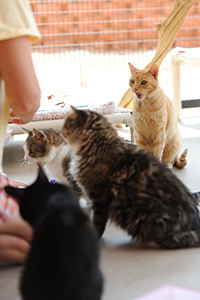 Tommy and Silly were saved during the Great Kitty Rescue of 2007. That’s when Best Friends was called in to help with a horrible hoarding situation in Pahrump, Nevada, where more than 850 cats were living in a small compound in the middle of the desert. They didn’t get adequate food, water, veterinary care or socialization, and the humans around them had failed in their meager attempts to care for them.

After the cats were rescued, many of them, including Tommy and Silly, were still very scared of people. Yet, caregivers at the Sanctuary, without forcing the issue, kept offering them chances to interact — in case they should ever change their minds and decide they wanted to climb down and be more social.

For a long time, caregivers’ efforts were met with a resounding “No” from both Tommy and Silly. But gradually, both cats became less and less afraid of their caregivers and increasingly more curious about them and all the activity on the ground. They even started spending a little more time at ground level. Noticing this subtle shift caused caregivers to not only encourage the cats to stay longer and longer, but also to try a little socializing. So, they pulled out a secret weapon — baby food.

A great staple in Cat World, baby food is used to make food taste better for cats with picky palates. It’s a great way to get a reluctant cat to take medicine, and it just so happens to be a wonderful socializing tool. Once Tommy and Silly started paying a little more attention to their caregivers, it wasn’t long before they, too, succumbed to the magic of baby food, even if it meant licking it off a human finger. 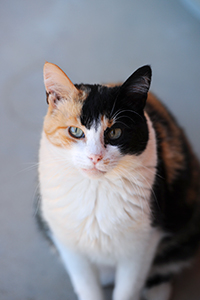 While Silly will sit prettily and let people get fairly close to her while she’s enjoying her treat, Tommy likes to make caregivers and volunteers work for it a little. He’ll watch them get down on their hands and knees and stretch out, extending one arm as far as possible toward him. But this effort isn’t quite enough to satisfy Tommy, who finds it necessary to make sure that there is indeed baby food on the end of the outstretched finger. Then, he hisses and does a funny little backing-away dance before tasting it. It’s his way of saying he’ll disappear if anyone tries to pull a fast one. After making that perfectly clear, however, he’ll come forward slowly and start to eat.

Although he and Silly still aren’t yet at the point where they’ll accept being petted, this seemingly small breakthrough is actually a huge step forward for both cats. It shows their willingness to let humans into their world. It paves the way for more contact in the future, and it increases their chances of finding loving forever homes. Now that’s magic.