Caregiver and volunteer coordinator Rosalie Wind has been a lifelong animal enthusiast - and we're not just talking dogs and cats. She has a strong connection with animals who are often overlooked as companions. "There are so many animals people don't realize are being over-bred and mistreated," Rosalie says. "There are chickens and ducks, and cows and goats, and bunnies," to name just a few.

When Rosalie came to Best Friends in January 2013 for the five-week internship program, she knew she wanted to focus on barnyard animals, and goats were of particular interest to her. So, when it was time for Rosalie to pick her "project animal" (interns and staff members often choose to spend extra time with animals who need a little more socialization and/or support than others), she chose Nubian goats Monty and Phil. 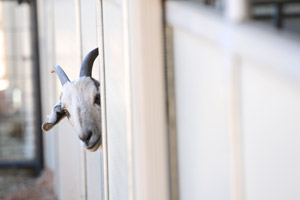 "The boys," as Rosalie calls them, had been rescued from a local community where they'd been living in dog crates. Though Monty - a black, white and tan boy with striking markings - and Phil - who is mostly white - are the same age (three years), they are not related. But no doubt the hardships they endured have cemented their friendship; they go everywhere together. And, when they first came to the Sanctuary, this meant that they both went to the far end of the pasture in order to avoid everyone. The boys were under-socialized and terrified of people, even their caregivers.

At first, Rosalie wasn't sure how she was going to ingratiate herself to the shy goat pair. But she guessed - correctly, as it turns out - that alfalfa pellets might give her a distinct advantage. So she figured out ways to get Monty and Phil on the far side pasture, away from the other goats, and she began offering them treats. In order to appear less intimidating to them, Rosalie kneeled down to their level at first. Then, when they got brave enough to approach her in this position, she began standing up and drawing them closer. Finally, she got them to walk alongside her, constantly rewarding them with the tasty alfalfa for staying near. 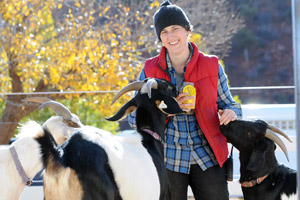 Rosalie spent the majority of her internship just this way: working with Monty and Phil until they began to recognize and trust her. She says that her end goal was to get the boys to the point where they could have their hooves trimmed - an important part of their routine care. "It used to be so scary for them," she says, but she and another caregiver were ultimately able to accomplish the task.

In addition, Monty and Phil have learned some cute behaviors that will help make them more adoptable. They've learned their names and will run up to Rosalie when she calls them. Monty began begging for treats by pawing like a dog, and Phil soon learned to copy the trick. They are even getting braver with other people. Rosalie will sometimes bring in volunteers to give them treats, and, she says, "it's cool to see them not completely run away from strangers." They'll even hang around in the same stall while the volunteers are cleaning, constantly on the lookout for treats.

Although Rosalie's internship ended, her relationship with the boys didn't. Now she's a caregiver in Horse Haven, the area of the Sanctuary where the goats also live, so she gets to spend time with them every day. "Sometimes I'll just go in and sit with them," she says. "They are serene and relaxing."

To learn more about Monty, Phil and the other barnyard animals at the Sanctuary, go to the Adopt a Pet section of our website.