Image
Cherry, a petite pig, is a special gal with a big heart.
By Christelle L Del Prete

OK, so Cherry hasn't yet been written about in a spider's web, but she is still "some pig." At just 105 pounds, she is also the smallest potbellied pig in Piggy Paradise. It is likely that Cherry was not fed properly as a piglet, which is why she remains small despite being fully grown at 12 years old. But a small stature isn't keeping this pig down; once you get to know Cherry, you'll realize that her personality is anything but petite.

Because she came from a hoarding situation, Cherry can be shy when you first meet her. But caregiver Betsy Skinner says, despite the fact that Cherry tends to keep to herself, she is a really sweet little pig. In fact, she is so sweet that she used to be quite popular with Sanctuary visitors who liked to take her on sleepovers. Though she enjoyed the excursions for a while, sleepovers can be stressful for pigs who aren't used to walking up stairs, over thresholds, or on slippery tiles. So Cherry began declining overnight invitations by planting her feet and refusing to walk up the road to the Sanctuary cottages.

Though she's retired as a sleepover pig, she remains a staff favorite. Caregiver Adria Johnson says that Cherry is one of the only pigs who will go for walks without being coaxed with treats. She has also excelled at clicker training and can now sit on command and roll a ball around. 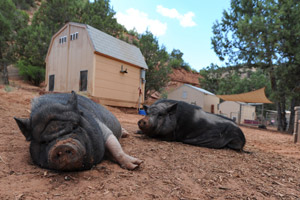 Lately, she's proving that she is a very helpful pig, too. Cherry has taken on the role of big sister to another potbellied pig named Penelope. Penelope is younger than Cherry, but she has early-onset dementia, and she often gets confused and disoriented when she is in the outdoor enclosure. This is when Cherry steps in to gently guide her back into the house they share. Adria says, during a recent snowstorm, she witnessed Cherry coming to Penelope's "rescue" yet again.

Now Penelope has a constant companion on whom she can rely. And Cherry gets something out of the deal too; because of her bond with Penelope, her social skills have improved, and she is now able to get along much better with other pigs. Clearly, the relationship is mutually beneficial. Cherry, with her compassionate heart and sweet spirit, is undoubtedly "some pig."

Learn more about Cherry, Penelope, and the other adoptable pigs at the Sanctuary.