Image
Wilson the dog discovers a whole new world one click at a time.
By Best Friends Animal Society
By David Dickson

Wilson the dog would make a phenomenal treasure hunter’s sidekick. This high-energy canine never met a patch of dirt he didn’t like. Perhaps you remember watching some of his digging antics on the National Geographic show "DogTown." 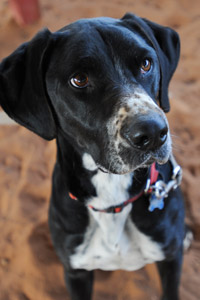 The thing about all this digging, though, is there’s more to his habit than just the love of throwing dirt around. Wilson has had struggles with anxiety, not to mention difficulties paying attention to the people around him. For him, it was easier to put all that energy into finding out what treasures might be buried beneath the ground.

Caregivers and trainers tried time and again to find a way to really connect with him, without a whole lot of success. Wilson mostly kept on doing his thing.

It’s important to remember that no two animals are exactly alike. What works for one doesn’t necessarily work for another, even if two animals have similar temperaments. That’s why every animal at Best Friends is treated as an individual, from training plans to eating plans.

For Wilson, the big trick was finding a way to hold his attention for any length of time. "It was all about focus for him," explains Best Friends dog trainer Jen Severud. In all the time she’d worked with Wilson, Jen had never seen Wilson maintain eye contact with her for more than a second. 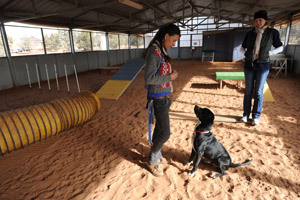 Marla gets Wilson ready for his test.

That was about to change.

One of Wilson’s caregivers, Marla Browne, wanted to help Wilson pass his Canine Good Citizen (CGC) test as a way to bring him one step closer to finding a home. Training for this test teaches a dog how to listen closely to instructions from his or her handler.

Bear in mind, a lot had already been attempted with Wilson, including long jogging sessions to see if he simply had to get out a few wiggles before he could focus. (Nope, Wilson has boundless energy.)

Clicker training, though, hadn’t yet been tried. So, Jen and Marla met for the first time to put together a clicker training program. "I think of the clicker as a communication bridge between ‘dog-lish’ and English," Jen explains.

Because of the fact Jen was scheduled to go on vacation immediately after their first session together, it would be three weeks before she saw him again. And wow, a lot can change in three weeks.

Is this the same dog? 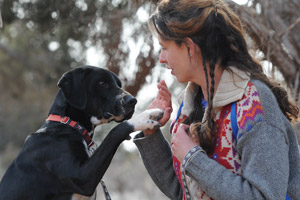 Wilson is a rock star!

When it was time for the second visit, Jen was blown away by what she found. "I walked in and it was like Marla had a different dog who looked just like Wilson," Jen says. "He was looking at me, he was paying attention. It was just like a light bulb went on."

Something about clicker training resonated with Wilson from day one. Jen couldn’t believe how quickly he keyed in and responded to the work. "He turned out to be a rock star," Jen says. In only a few short months, Wilson was ready to take his CGC test.

He didn’t pass the first time he tested, missing it by only one item. A dog needs to pass 10 out of 10 items, and the one Wilson missed was that he couldn’t quite sit still when a new dog approached. Wilson’s job was to sit by Marla, but he just had to trot over and say hello. Hey, he’s a social butterfly.

On the next attempt, however, Wilson passed his CGC with a perfect 10 out of 10. "That was really exciting," says Marla about Wilson’s big day. "I think he is so capable."

In other words, this treasure hunter’s sidekick is more ready for a home than ever.

Wilson or another dog at the Sanctuary? Your new canine pal would be ever so grateful to you.