Image
When an accident left Spearmint Sally's hind end paralyzed, lots of love, care and physical therapy at the Sanctuary got her moving again.
By Sarah Thornton

Zipping through her foster family’s home in her cart (the third one after outgrowing two others), Spearmint Sally is an unstoppable force. Her front legs are strong from pulling herself along, and you can occasionally see her back legs trying to join in. That wasn’t the case just two months ago when her back legs had no movement at all.

Before arriving at Best Friends, Sally was in an accident that hurt her back and left her hind end paralyzed. But her eyes were bright and her fluffy little ears alert. Veterinary staff at the Best Friends Animal Clinic concluded that no bones had been broken, but determined the fluffy pup had suffered nerve damage. She couldn’t move or feel her hind end and, at first, she needed help going to the bathroom.

As soon as she arrived, the medical team got her therapy started ― acupuncture treatment and then laser therapy (a deep-penetrating cold laser that helps reduce inflammation, relieve pain and promote healing). Sally especially enjoyed the back massages, which stimulated her nerves with the goal of reawakening them to sensation. And all the while, she was thrilled with the attention.

When she was well enough to leave the clinic, she moved in with Phyllis Meyer-Parthemore, a volunteer who had worked at the Best Friends clinic for years before retiring and who was well-equipped to help Sally progress.

[Paralyzed Chihuahua can outrun everyone in his tiny wheelchair] 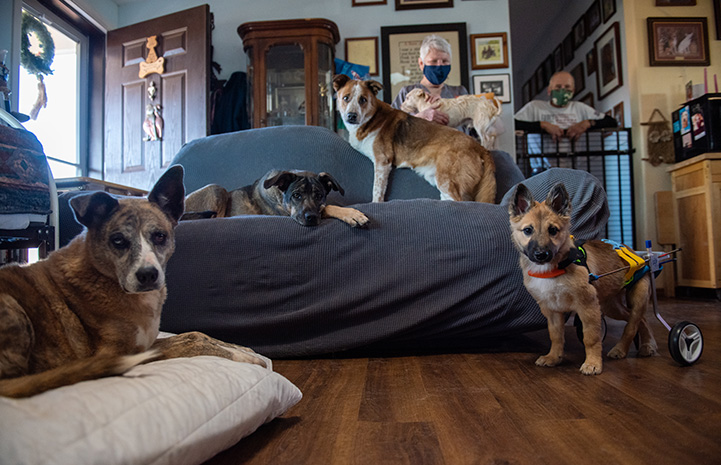 Getting better every day, one step at a time

Phyllis says they do exercises with her twice a day and there are a lot of them, from tickling Sally’s toes with an electric toothbrush to puppy squats (pushing herself from a half-seated position to a stand for some treats). Her daily regimen also includes a lot of range-of-motion work that helps to both get her legs moving and get them used to natural positions.

Sally also returns to the Sanctuary twice a week for hydrotherapy. Phyllis is there, along with two other members of Sally’s “team” — Monica Kaiser, a veterinary assistant, and Kathy Orf, a volunteer licensed in physical therapy. Sally is always happy to see her friends, eager to greet them and happy to be the center of attention.

On the underwater treadmill, Kathy helps Sally walk for two or three minutes, gently guiding her feet forward step by step. Anytime Sally takes a step on her own, there’s a round of extra-excited praise. And she’s getting better at it.

[Dog paralyzed by valley fever gets back on her feet]

“She’s taking really good steps. Some of these are all on her own,” says Kathy. “I’m kind of just giving her a little bit of input. I’m initiating it with just a little touch.”

Kathy says the treadmill work is about patterning. “So, I’m patterning her taking steps with these back legs. And that is kind of reinforcing the neural pathways … What we’re trying to do is get those nerves to essentially wake back up.”

In the water, Sally is able to support herself with the slightest of help, thanks to her own natural buoyancy and her life vest. Hydrostatic pressure (the pressure of the water) helps, too. The simple sensation of water on Sally’s skin, says Kathy, much like the massages and tickling is another way to get her nerves firing up again. And once she’s able to hold her own weight a little more, they’ll start working with a faster treadmill speed to build strength using the water resistance.

They’re all excited with how fast she is progressing, hopeful for what the future may hold. “She’s improving each time,” Kathy says. 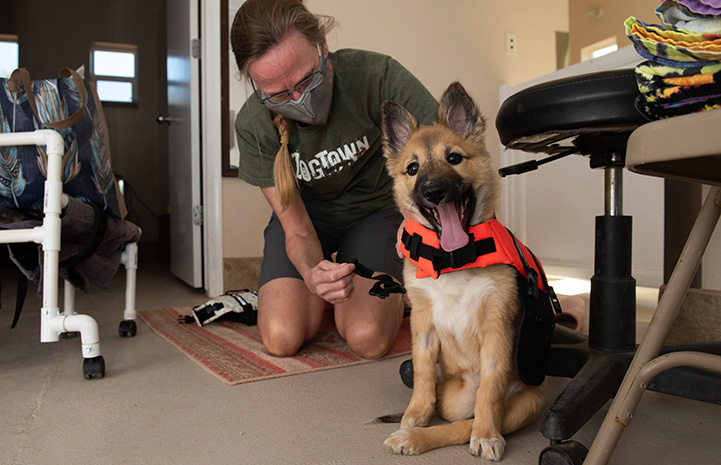 Still time to be a puppy

Between physical therapy sessions, Sally spends the rest of her time just being a puppy. And she’s making quite a few canine friends in addition to her human ones. Monica’s dog, Alaina, is a favorite playmate when they get the chance to run around together. They play tag back and forth, and Alaina doesn’t mind when Sally grabs hold of her tail. Their game of chase is the perfect chance for Sally to get all of her puppy energy out and learn the do’s and don’ts of dog play.

Back at Phyllis’ home, the young puppy has even more canine role models. While some of them are more than happy to stay out of the way of Sally and her wheels, Phyllis says one of them, Charlie, is completely smitten. “He’s about nine, but he likes puppies and he’s always really kind with her and he plays with her and they circle around together.” 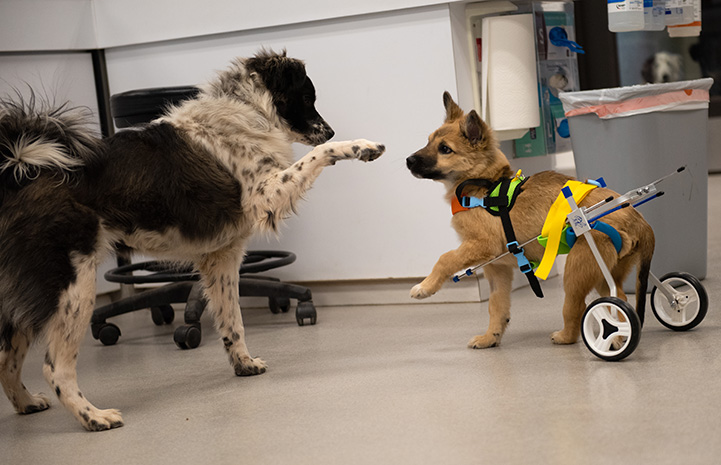 Sally runs under Charlie’s belly in her cart, play-bowing and jumping around with the extra support. She’ll throw toys around and play tug with anyone who’ll join her. Any new face is a potential friend, as far as Sally is concerned.

“She’s impressive,” Phyllis says. “She’s a very emotionally well-rounded puppy.” There are few obstacles she can’t handle at this point. Like any other pet with special medical needs, she’s adapted. And as she continues to improve, she finds new ways every day to put smiles on her friends’ faces.

Help pets get back on their feet

Together, we can help pets like Spearmint Sally find their footing again and go on to new homes.