"He'll walk to Las Vegas if you let him," says caregiver Dale Oster. She's talking about Alan, an orange tabby cat, who, along with his roommate Stardust, calls Cat World Headquarters home.

Though he hasn't crossed state lines yet, Alan has been known to "trick or treat" at various buildings in Cat World, particularly Hope House (the medical building), where he resided when he first came to the Sanctuary. If the door isn't opened right away, he will sit on the doorstep until someone realizes he is there and decides to give him a treat.

Though he's very polite and friendly with volunteers, those who take him for a walk on his harness and leash also have to bring along a stroller. That's because Alan likes his walks so much that he sometimes refuses to turn around to go back to Cat World Headquarters after he's finished making his rounds. Volunteers then have to scoop him up, place him in the stroller, and wheel him back. For Alan, this is just part of the fun. He is an alert cat who enjoys viewing his surroundings from a different perspective. 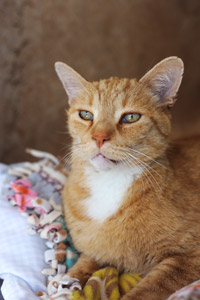 Alan's walking prowess, and his keen interest in the world, is striking considering his history. On one particularly cold day last winter, Alan dragged himself through a cat door into someone's garage. Luckily, he picked the right place. The owner of the garage was a kindhearted person who quickly noticed that Alan not only seemed to have been abandoned, but also appeared to be in pain. The garage owner fixed him a warm bed and promptly took him to a vet.

The vet was able to relieve the worst of Alan's symptoms, but the diagnosis was serious: a severe digestive problem that would require lifetime care. The fact that he has special needs would also make it a bit difficult for him to find the right home. So, in February of this year, Alan came to Best Friends, where he has been making a big impression on both caregivers and volunteers.

Some cats can be a bit ornery during medical treatments, but not Alan. He's the non-complaining sort who actually enjoys the extra attention. He eats his special diet, takes his medicine gamely, and seems to look forward to his daily fluid administration, as it means quality time with his caregivers.

But despite all the extra care, the first thing people notice about Alan is not that he has a special condition, but that he is a genuinely nice cat. Dale points out that "he has lovely manners always." Not only is he great with people, but he is also even-tempered and "superb" with other cats. He has an especially good relationship with Stardust, who has the same condition as he does. 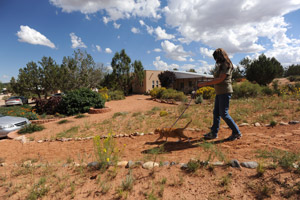 During a recent visit to the Sanctuary, Candi Crawford, a manager of outreach programs for Best Friends' Los Angeles programs, took Alan for a walk after one of his treatments. "He didn't care that it was raining and thundering outside," says Candi. "He was on a mission for those treats and dragged us along (to Hope House, the medical building) to get them." And though he walked back to Cat World Headquarters on his own, he took the long way. "I think he wanted to spend as much time exploring as he could," Candi explains.

Though Candi had to say goodbye to Alan to return to L.A., her work with

the No-Kill Los Angeles (NKLA) initiative will help to dramatically reduce shelter deaths for homeless cats and dogs - those who, like Alan, need a little extra help getting a second chance.

Get more information about Alan or other adoptable cats at the Sanctuary.