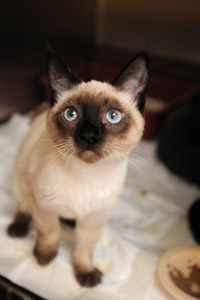 Connor lies curled in a tiny ball on her bed until she opens her big blue eyes and sees a red laser light skittering across the floor. Naptime’s over; she’s up and after it. With her short, fuzzy tail, the little cat looks like a cross between a Siamese kitten and a bunny as she hops across the room. But nobody’s going to tell Connor she can’t get that laser light. She leaps after it again.

Meanwhile, another young cat, Aramis, is seated on a rug in the kitchen. He’s got one brilliant topaz-colored eye trained on the breakfast preparations, the other on Connor’s antics. His posture is regal, despite the fact that his back legs are kicked out to the side at an awkward angle. Like Connor, Aramis is semi-paralyzed in his back end due to birth defects. Even so, he rules the roost, exuding cool confidence; he knows he’s handsome.

The most heroic cats

Aramis and Connor live in the lobby at Quincy House, where the Sanctuary’s most special-needs – and most heroic – cats live. As a young mother living on the streets, Snowflake was hit by a car and severely injured. She dragged herself back to her helpless kittens, who were waiting under a trailer. Vets were able to fix her broken pelvis, but the nerve damage left her paralyzed, and her back legs had to be amputated to keep her pain-free. But today, Snowflake zooms around as if she still has four good legs.

No matter what way these cats are shaped or formed, or what injuries they’ve overcome, they’ve learned to use their bodies to get around. “They have no emotional attachments to their physical challenges,” says Cat World caregiver Joni Miller. “They say, ‘This is how life is,’ and they adjust and move on. And they are very happy.” 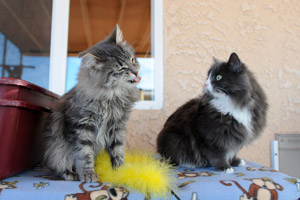 Even bath time is a happy occasion. In the room affectionately known as the Incontinental Suite, cats like Mousie get baths daily to help them stay clean and comfortable. Mousie has Manx syndrome, which shortens a cat's tail, but also the entire back end, preventing the spinal cord, organs and muscles from developing properly. Like children, the cats fuss a bit before tubby time, but relax once submerged in warm, bubbly water. And they don’t miss a beat, going right back to what they love most after a bath. For Mousie, that means racing around in the outdoor cattery when the weather is nice.

As she bathes a cat named Prism with a gentle spray of warm water, caregiver DeLynn Brainerd says that, despite their issues, Mousie, Prism and the others “are still just typical cats who love catnip, laps, laser games and sleeping in the sunshine.” And it isn’t just the staff who see the zeal these cats have for life. Many volunteers request shifts in Quincy House, and some return year after year. Volunteer Domenique Chalala says, “You can clearly see that (these cats) want to live. You only need to look and see who they are … and listen to them purr.”

What’s most important at the Sanctuary is helping pets overcome enormous physical challenges to live the life of Riley until they one day find a home of their own. Connor is proof that, given the chance, animals can thrive in ways that may have once seemed impossible. She hops determinedly in pursuit of her “prey,” and then – just for a second – captures that little red light.

Learn more about adopting Connor, Aramis, Mousie or another special-needs cat from the Sanctuary.