Few things in life are as irresistible as kittens. Who wouldn’t want to adopt a healthy, playful ball of fluff with a long, happy life ahead of her? But the Sanctuary also caters to special-needs kittens, most of whom are every bit as capable of living long, happy lives – and all of whom are every bit as irresistible as any other kittens. Caregivers like Cassie Rowell, who have plenty of experience caring for these special little ones, show just how wonderful these kittens can be and how strongly they can bond with the people who love them just as they are.

Special-needs kittens with cerebellar hypoplasia getting a good grip 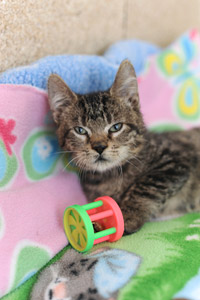 Cotton, an adorable gray tabby kitten, came to Best Friends from a rescue organization in New Jersey. The super-sweet kitten was born with a neurological condition called cerebellar hypoplasia (CH). The condition, which for Cotton is severe, affects his motor skills, making him unable to walk and move around normally. But even a short visit with Cotton reveals how happy and loved he is.

One of Cotton’s favorite places to be is curled up in his deep, round bed, purring and kneading. This is where he feels the most secure, other than when he’s cradled in someone’s arms. Cotton may not be able to get around like other kittens, but he has his own way of moving, and it’s utterly endearing. Rubber-backed throw rugs in his room help him get a good grip and pull his wobbly little body to and fro. He’s even able to use the litter box and eat on his own.

And Cotton loves to eat. He also loves being with his caregiver. While Cassie holds him like a baby, he playfully bats and bites at her long blonde locks. Sometimes Cassie will also bring him to the window of Morgaine’s, the building in Cat World in which he lives, so he can wave to people on the Sanctuary tours. She’ll also bring him out to the “catio” (a screened-in patio for cats) when it snows, because he loves to sniff the softly falling flakes.

Read about a kitten with CH adoption 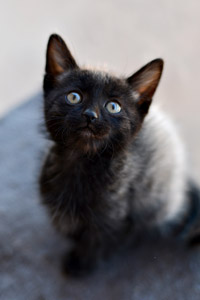 Littermates Ashby and Buttons recently shared a room in Morgaine’s, not far from Cotton. Both kittens were born with club feet – Buttons’ front paws and Ashby’s right front paw weren’t quite normal. Though both were able to walk, they were essentially walking on their elbows, and it took them a little while to gain balance and nimbleness.

Buttons and Ashby were also not eating well when they first came to the Sanctuary, so Cat World team leader Judy Preus took them home at night to syringe- and bottle-feed them. With all the love and special care they received, the brothers began to flourish and can now run around and play just like any other kittens. Their lopsided gaits became a lot less noticeable during the months they spent at the Sanctuary, and Buttons gained strength in one of his front feet.

Shy at first, the curious brothers warm up to new people quickly and have a wonderful time playing with boot laces and climbing up into laps. Their adorableness and winning personalities also landed them in homes of their own; both Ashby and Buttons went home a few days before Christmas.

While Cotton is still at the Sanctuary, there’s no doubt that someone will soon fall in love with the irresistibly wobbly little cat. And with some simple in-house additions (like rubber-backed throw rugs) and a little extra TLC, he’s sure to make someone a wonderfully loving and special pet.

Get more information about Cotton and other kittens at the Sanctuary.