Image
This visitor was on a mission for a woman who couldn't make it to Best Friends herself.
By Best Friends Animal Society

Angelica Gonzalez-Eskel had dreamed for years of visiting Best Friends Animal Sanctuary but she never thought it would happen.—until she and her husband, Bill, made a trip to Las Vegas and realized they had time to also swing by Best Friends. 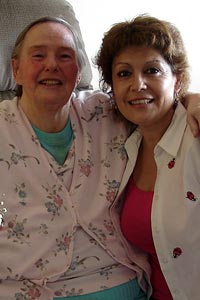 For Angelica (Pictured left with Nellie), it was a dream come true. But little did she know that she would also be helping along somebody else’s dreams. Angelica heard about an elderly woman who lived in Chelsea, Massachusetts. This lady, a woman named Nellie Small, always called Best Friends to check on a few favorite animals she’d sponsored through the years but had never met. Turns out that Angelica, of Manchester, New Hampshire, didn’t live too far away from Nellie. So she struck up a friendship with her.

One year and a second trip to Best Friends later, Angelica decided that she wanted to do something special for her new friend Nellie, who would never be able to visit Best Friends. Angelica took roughly eight million pictures of every nook and cranny around the sanctuary, collected back issues of the magazine (because of a fixed income, Nellie had to let her membership expire), and made a photo album. While volunteering at Best Friends, Angelica told everyone about Nellie and soon some people started a collection to renew Nellie’s membership. Nellie described receiving the gifts and visiting with Angelica as one of the happiest moments of her life. Isn’t it amazing what a little kindness can do? Angelica, you’re an inspiration to us all.