Image
Spunky senior cat can be demanding, but she enjoys being around people. She is feeling better after receiving treatment for kidney and thyroid issues.
By Christelle L. Del Prete

If you’ve ever heard the expression “It’s always the little ones” in reference to tiny dogs with big personalities, you should know that the saying holds true for cats, too. It is certainly the case with Annabelle, a spunky senior tabby cat who lives in the lobby in Jill’s Diner, a building in Cat World. Annabelle is smart and spirited, and she knows how to get what she wants from people. Not long ago, she found herself homeless at the age of 13, but her can’t-miss personality means that she quickly has everyone she meets wrapped around her little paw. 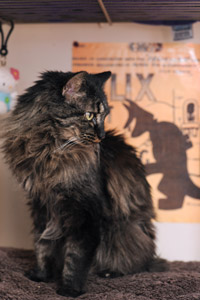 Before Annabelle came to Best Friends, she had a loving home where she was spoiled and treated like a princess – that is, until her person became ill and had to go to an assisted living facility. By then, Annabelle was 13 years old and not very used to meeting new people since her person had lived alone. The animal hospital that had provided Annabelle’s veterinary care since she was a kitten stepped up to try to find her a home. When that proved to be a challenge, they reached out to Best Friends for help.

Here at Best Friends Animal Sanctuary, Annabelle is once again treated like royalty. Although she technically lives in one of the cat rooms in Jill’s Diner, she spends most of her days in the lobby. On particularly cold winter days, she curls up in a cozy cat bed in front of a heat lamp. Her caregiver, Rachel Cartee, says that Annabelle likes to lie there and look up at the stars (the ceiling of Jill’s diner is adorned with colorful stick-on stars). Perhaps the now 14-year-old Annabelle is wishing on those stars for a home of her own in which to spend her remaining years. But in the meantime, this tiny senior cat is living large.

Annabelle loves getting special food and treats from Rachel, and she has a rather discerning palate. She’s also quite particular about how she eats; doting volunteers often feed her by syringe or eyedropper, like a baby bird. That’s not because Annabelle can’t chew, but because she enjoys eating that way and may have been fed like that in her previous home. At any rate, she seems to have both caregivers and volunteers well trained to meet her every wish.

And they are more than happy to accommodate her special requests. Annabelle is clearly a staff favorite. Rachel says she is a super smart and sassy cat: “She doesn't ask for anything – she demands it, and you feel honored to provide it.” Her caregivers also admire Annabelle’s spirit and boldness. You could say she pretty much owns the place, and that Jill’s Diner could just as easily be called Annabelle’s Diner. 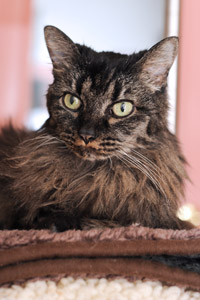 She may be demanding, but Annabelle’s gotten a lot more used to people and obviously likes them. Her improved attitude may be due to the fact that she’s feeling better. Annabelle has some kidney and thyroid issues, not uncommon for senior cats, which are being treated with medication and fluids.

She’s also gained a good feline friend in Papa, another senior cat who gets plenty of special love and attention from caregivers, visitors and volunteers. Although he is also a strong-willed kitty, he and Annabelle get along just fine and are happy to share all of the good times that can be had in the lobby of Jill’s (or Annabelle’s) Diner.

Get more information on Annabelle and other adoptable cats at the Sanctuary.

Looking for ways to give this year? Volunteer or donate.