Image
Rappelling expedition group in Utah's Escalante National Monument spots a prairie falcon trapped in the bottom of a canyon and in need of rescuing.
By Sharon St. Joan

Recently, a local tour guide was leading a group on a rappelling expedition into one of the slot canyons of Utah’s Escalante National Monument, when they spotted a young prairie falcon trapped in the bottom of the canyon. A close cousin to the peregrine falcon, the fastest animal on earth, able to dive at speeds of 200 miles per hour, even noble wild creatures sometimes need rescuing.

The bird was trapped in a slot canyon that, at its base, was only two feet wide. Even if the falcon had been old enough to fly, the canyon wasn’t wide enough to accommodate the bird’s wingspan. The young falcon was still in the branching stage — when young fledglings spend a lot of time going from branch to branch before they launch into flying. Totally confused, the bird had no idea what to do and couldn’t escape the canyon without help.

Helping a prairie falcon out of a tight spot 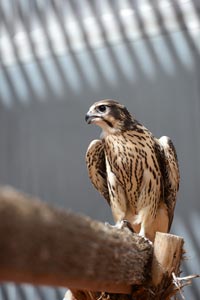 Fortunately, the rappelling team members were experts at getting out of tight spots. They managed to rescue the falcon and bring him to Best Friends where Carmen Smith, licensed wildlife rehabilitator and manager of the Wild Friends area of the Sanctuary, examined the bird. She saw he was very thin and must have spent quite some time stuck in the canyon. There were abrasions on his wrists from trying to get out. It was a stroke of luck that the rappelling team spotted him.

Carmen started the bird on a regimen to regain strength. The falcon was re-hydrated, kept very quiet and given only small quantities of liquid food. Though the bird was very weak, the fact that he was feisty enough to try and escape while he was being fed was a positive sign.

Eventually he was well enough to go on to a diet of solid food. He spent about a week inside, but was still looking a little disheveled and not quite right. So he was moved into an outside area in order to be acclimated to the outdoors again. Once acclimated to outside temperatures, he moved up into the large flight aviary, where he lives next door to an eagle occupying a second space in the aviary. He’s already flying, proving that he’ll soon be ready to be released.

One of the major considerations with birds is that they must be released at a time and place appropriate to their migratory pattern. Carmen often gets advice from Keith Day, sensitive species biologist for the Southern Region of the Department of Wildlife Resources. Keith keeps tabs on the habits of Utah’s migrating species. Ideally, the release should occur in the right habitat a few days ahead of the migration, so the bird can then migrate along with his new friends. To survive and thrive in the wild, a bird always needs to be with others of his own species. Alternatively, the bird can be transported to the destination site of the migrating birds.

The young falcon most likely will be released either near Price or Hurricane, Utah.

The falcon now has a bright future ahead of him and will be able to enjoy the beautiful days of autumn, from his bird’s-eye view in the sky.

Learn more about Wild Friends at the Sanctuary.