Image
Phanty was very skittish when he was rescued off the streets, but now in living in a secure place, he has become a huge love bug.
By Christelle L. Del Prete

Phanty knows a thing or two about being mysterious and elusive. His got his name, a shortened version of “Phantom,” because that’s how he seemed to his rescuers. The big black cat was a stray in California, in desperate need of help. Though he was a bit skittish and afraid of people, he was also very thin, hungry, and starved for human affection.

So Phanty went meowing door to door at an apartment complex, until he found someone willing to feed him and give him love. He’d come, get what he needed to survive, and then disappear again. This went on for nearly two years, but Phanty needed to be an indoor cat, and his benefactor couldn’t keep him. She had two other cats, and Phanty had tested positive for feline leukemia (FeLV), a virus that attacks a cat's immune system, and is a "social disease," meaning it is easily spread from one cat to another through close physical contact. 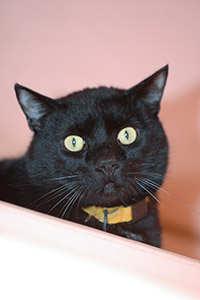 So Phanty came to the Sanctuary, where he was examined by the Best Friends veterinary team. The news was good: Phanty’s first test had been a false positive. He was FeLV free and able to move into a room with other cats. But, when he did that, he immediately flew up into the rafters. And stayed there. He’d found someone he could trust once, but now he was surrounded by new faces – both human and feline – and was feeling shy and unsure of himself.

From his safe spot in the rafters, he peered down with his wide, green eyes, watching everything but not daring to venture down and be a part of it. As it turned out, however, he was far more wary of two other cats in his room than he was of humans. Once his caregivers figured this out and moved the other cats to another room, Phanty began to relax. He soon realized that he fit in perfectly with the remaining cats, and that his caregivers were pretty cool, too.

Cat comes down from the rafters

It was time, Phanty decided, to climb down from the rafters. And, while he’d always accepted petting, he also decided it was time to come out of his shell and show just what a friendly and loving cat he is. He’ll now actively seek out affection. His new favorite thing is to just lie around and be petted, or to have his shimmering black fur brushed.

When volunteers and visitors come into his room, he’ll come out and greet them. If he’s been napping in the rafters, which he still does on occasion, he’ll climb down slowly and walk over to say hello with his back arched and tail up, as if anticipating some nice scratches. Then he’ll roll over at their feet and show his belly. Though it’s taken time, Phanty’s done a complete 180 – from an underfed, skittish stray to a big love bug.

Learn more about Phanty and other pets featured in Best Friends’ Back in Black adoption promotion.