From the streets to warm sheets: A pit bull’s journey home

Image
It took a while to find a new home for Samwell, a young dog with a lot of energy in a Houston shelter, but his new family loves everything about him
By Anna Mariah Christy 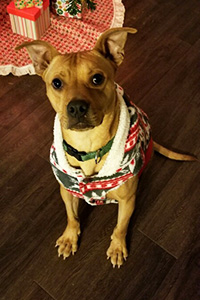 When Samwell entered the Harris County Animal Shelter in Houston as a stray last summer, he had heartworm disease and scars that hinted at a rough start to life. He was also a strong 50-pound pit-bull-terrier-like dog with boundless energy who’d landed in one of the country’s busiest shelters.

He was in a tough spot. Hundreds of new dogs were arriving at the shelter each week, and there wasn’t enough space to house them indefinitely until adoption. But as the old saying goes, “It’s always darkest right before the dawn.” And when it comes Samwell’s life, nothing could be truer. Landing at the shelter and later moving into a Best Friends foster home led to a new family. And to them, Samwell is just perfect.

Striking out at adoption events

Shortly after Samwell’s arrival, Best Friends held a super adoption in Houston and invited rescue groups and shelters (including Harris County Animal Shelter) to bring their adoptable pets. At the end of the two-day event, all but five of the dogs from Harris County were adopted, but Samwell wasn’t among them.

Knowing that Samwell would be returning to a shelter at maximum capacity, Best Friends took him and one of the other pups, while another partner organization took the other three. This meant that the at the end of the event, Harris County staff could happily return to the shelter with their vans empty.

The Best Friends team in Houston matched up Samwell with a foster home and began treating his heartworm. Deyra Galvan, event and adoption coordinator for Best Friends in Houston, calls Samwell “high energy and silly,” but also “very loving ― just a big puppy.”

Samwell’s larger-than-life puppy energy proved difficult to contain, but his foster family dutifully brought him to more adoption events. Still, no one chose him. That energy also caused him to bounce around among foster homes until he landed in the home of Nancy Neugebauer, a longtime Best Friends supporter. “She worked with him and was patient,” says Deyra. “She loved him so much.”

Nancy saw that Samwell’s zest for life was incredibly endearing, but she also worried that it was turning off potential adopters. As it turned out, one potential adopter who was willing to embrace everything about Samwell happened to be in the market for another dog. 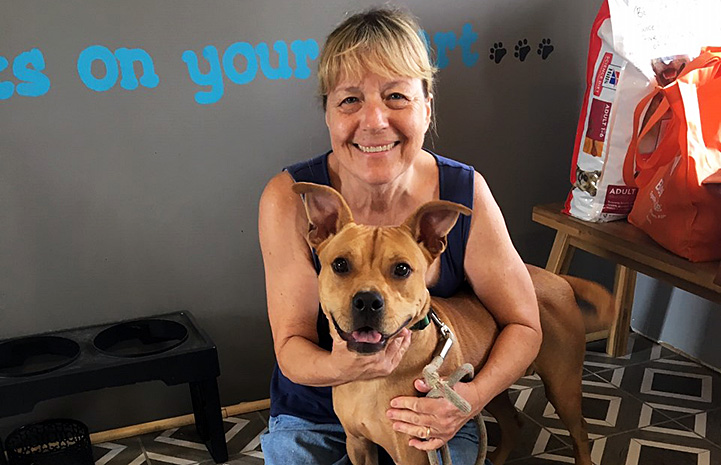 James Ehmer had recently lost a beloved dog, which left his other pup, Scooter, feeling lonely without her friend. Scooter happens to be a brown, medium-sized pit-bull-terrier-like dog with boundless energy. When James came across Samwell’s photo on the Best Friends in Houston web page, he saw just the type of dog that he, his wife and two children were looking for.

James inquired about adopting Samwell and soon scheduled a meet-and-greet. When the family arrived, Deyra had Samwell out walking on a leash. “James pulled up in the parking lot and Samwell rushed me over to him, jumped up and was licking and hugging James instantly like he knew him,” says Deyra. “It was truly love at first sight for both of them.”

For months, everyone had been waiting for this moment. Scooter also approved. With that, Samwell had a new family. 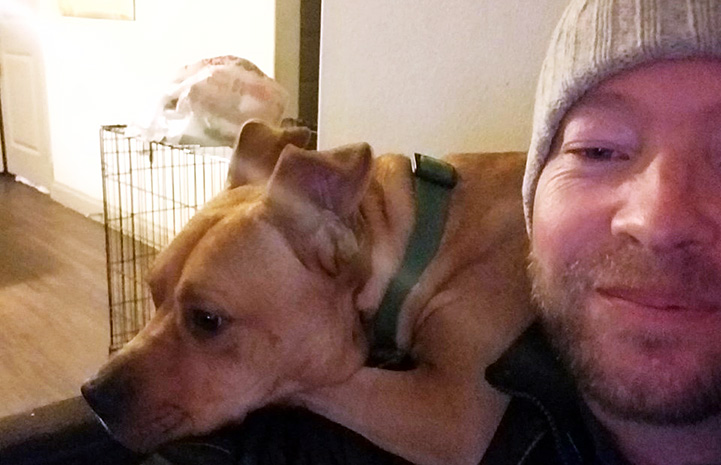 Since going home, Samwell has become best friends with Scooter. Not only does she look like she could be his twin, she shares her prized toys, makes room for him on the couch and ultimately shares a place under the covers at night with James and his wife.

“Lieutenant Samwell,” one of his many nicknames, has taken up the role of protector. On New Year’s Eve he herded the family onto the couch and patrolled the home while fireworks exploded nearby. James jokes that Samwell stays extremely close to him (as if attached by Velcro) ― something clearly confirmed by photos of Samwell relaxing on James’ shoulder.

Samwell has been jet skiing at the family’s lake house. He curls up in James’ lap during storms. When the flu hit the family hard in January, Scooter (ever the worried older sister) and Samwell (the protector) joined forces to keep the family warm, curl around their heads and press against their chests as they recovered in bed.

Samwell’s learning a lot, too. James has taught him to sit, shake, stay and go play hide-and-seek. James and his daughter tell him to stay while they go hide, and then they call for him while he searches the house. James says that when Samwell finds them, he acts like he hasn’t seen them in ages and goes crazy with joy, licks  and hugs.

It’s just a game, because Samwell will never again have to seek a new home. He’s already there. 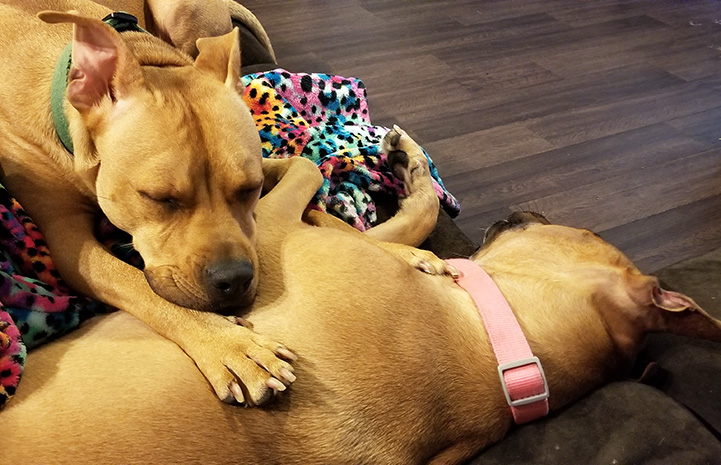