Image
A head-strong donkey receives training that requires a lot of patience from her trainer, and a Shetland pony basks in the spotlight at the Sanctuary.
By David Dickson

Teaching a donkey to perform new tricks or skills is not always something you can set out to accomplish with confidence in the outcome. That is, not unless the donkey wants to learn those tricks in the first place!

Sweetheart the donkey has always been a strong-willed type. She’s the kind of gal who will only follow training instructions until she gets bored. At that point, she decides to flop down in the middle of class for a nap or else run off and find something more interesting to do. When you try and teach a donkey any sort of skill or new behavior, more often than not she ends up changing the curriculum to her tastes.

Best Friends' horse caregiver Jackie Mawhinney has been working with Sweetheart the donkey for years. She has been teaching her the Parelli training system (the horse training method of choice at Best Friends), but to be honest, Sweetheart has only so much patience for that. "If she doesn’t see the point, forget it!" says Jackie. Still, Jackie has a limitless supply of patience with Sweetheart. She continues to work with her week by week, letting Sweetheart proceed at her own pace.

There was a breakthrough some time back when Jackie tried letting Sweetheart pull a cart. Jackie has donkeys of her own who enjoy pulling carts, and she figured Sweetheart might enjoy it too. Her hunch proved to be right. Sweetheart took to pulling a cart with gusto. To Sweetheart, such an outing was far more interesting than other forms of training.

At length, however, like all shiny new toys, the standard cart rides around the Sanctuary lost some of their appeal to Sweetheart. Jackie had to switch locations all the time, including eventually going into town and traversing the streets. "She loved it," Jackie said about Sweetheart’s first trip into town. Put simply, it was new. The whole concept of new really appeals to Sweetheart. As long as Jackie can keep things fresh and interesting from Sweetheart’s perspective, Sweetheart enjoys her outings quite a bit.

Not long ago, Jackie decided to try mixing things up even more. She brought Sweetheart into the obstacle course arena at Best Friends. Or rather, Jackie herself walked in there and then begged Sweetheart to follow. It was anybody’s guess if Sweetheart would take the bait. Sufficiently intrigued, though, Sweetheart decided to check things out. 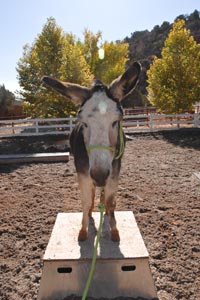 Agility training and obstacle course games can be great ways to boost confidence. Not that Sweetheart has much need for that. She’s already convinced she should rule the universe. Still, she was at least interested enough to give the obstacles a try. Jackie had to demonstrate first, but then Sweetheart followed. Turns out she did incredibly well, becoming the first donkey at the Sanctuary to pull off such impressive feats as walking a bridge, maneuvering barrels, conquering the teeter-totter, and standing all fours on a platform.

The platform turned out to be her favorite. "Sweetheart felt very clever," says Jackie. There was a large ball in the arena that Sweetheart wanted nothing to do with. That’s par for the course, really. If Sweetheart hadn’t found at least something she didn’t deem worth her time, it might’ve been time to call for checking her temperature!

Just down the road in Horse Haven, another Sanctuary animal has been making a name for herself lately. While Sweetheart the donkey doesn’t necessarily seek out crowds or attention for her antics, Sira the pony has been soaking up the spotlight right, left and center.

Shetland pony who loves the spotlight

Sira the Shetland pony has always been a crowd-pleaser who thrives on attention wherever she goes. Her talents at wooing a crowd have only grown over the years. One big step forward in terms of winning over groups of people came when she started visiting a nearby retirement home. The residents love her! And really, why wouldn’t they? She’s got it all. A cute face, a winning personality, and she loves to interact with everyone. "She has become a great ambassador," says Best Friends' horse manager Jen Reid. 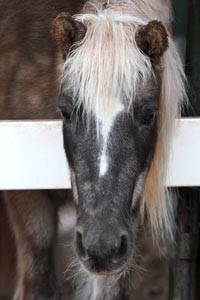 After Sira’s visits to the retirement home were such a smash hit, she began making appearances elsewhere every chance she could, including a stint at a Best Friends animal care fair a little while back. All these public appearances only helped prepare Sira for her recent brush with stardom, which was perhaps her biggest crowd-wooing success of all.

Eighty (yes, 80!) kindergarteners came to visit the Sanctuary on a field trip last week. And, big surprise, they were all super excited for a chance to meet some animals. It was show time. Sira definitely stepped up to the plate. She not only batted her eyelashes and played her cute-card for all she was worth, but she ate hay pellets out of their hands. Each kid got a chance to feed her one or two of the pellets. Needless to say she was queen for a day.

At Best Friends, whether it’s mastering a teeter-totter or entertaining dozens of school kids at once, you just never know when an animal is going to surprise you!