Image
Sun conure and Sunday conure lose their home when their family moves, but this pair of birds finds another perfect family who adopts them.
By David Dickson

When Pumpkin the sun conure and Isabella the Sunday conure came to Best Friends around a year ago, they already knew people can be friendly. They had the good luck of living in a home where their family doted on them every day. In fact, when it came time to turn in for the night, Isabella and Pumpkin didn’t sleep in a cage. Nope, they got tucked inside a covered cat bed with stuffed animals to keep them company until morning. 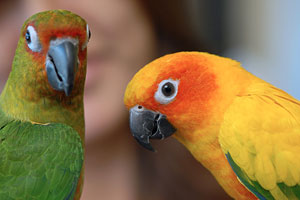 Sad to say, their original family moved to Europe and couldn’t take the pair along. The two young birds came to live at Best Friends, where they were extremely friendly from the start. Parrot staffers thought Pumpkin and Isabella would find a home in no time. Yet weeks became months, and still that special someone hadn’t come along.

Aimee Bagnell of St. George, Utah, has loved conures since childhood, though she’s never had one of her own. As a kid, Aimee’s neighbors had a sun conure and other parrots she helped care for from time to time. She’d always admired the birds. Recently, when she and her husband decided they were ready to adopt, Aimee had hoped to find a sun conure at last. They didn’t have to look far. Pumpkin and Isabella caught their attention right away. 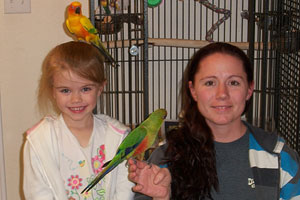 For one thing, it doesn’t hurt a bit that these two birds are so visually striking. "We both thought they were really pretty," Aimee says. Even better, the connection grew from there. Both birds took to Aimee and her husband instantly.

Isabella and Pumpkin had a home again.

A perfect home for pair of birds

"They’re a good match for the family," Aimee explains. "They’re nice, they let the kids handle them." Their six-year-old daughter and four-year-old son love interacting with the birds. 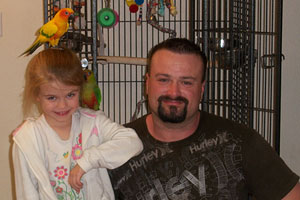 For a pair of birds who thrive on human attention, they landed in an ideal spot. They get the red carpet treatment every day. "They’re spoiled," Aimee adds. For example, part of the new daily routine is for Aimee to get up and chop an apple first thing. She serves it to the birds with a nut of one sort or other. If for some reason she’s a little behind in her schedule, both birds squawk at full volume to let her know. Oh, and they also happen to love water. In their new home, the two birds get as many showers as they want. They’re living the good life.

Back at Best Friends, parrot staffers are thrilled with such an ideal happy ever after. Many birds who lose their first home have difficulty adjusting to life in a sanctuary setting. Pumpkin and Isabella definitely began showing signs as the months rolled on that they desperately missed the experience of being with a family. Now, however, they’re back to their old selves. "I’m just really happy about this adoption," says parrot manager Jacque Johnson.

How to help the animals

Even if you’re not in a position to make a lifetime commit to a parrot or other animal here at the Sanctuary, there are many other ways you can help homeless animals. Find out some of the ways.