Image
Chihuahua who is 16 years old is a ‘super senior,' but she doesn't look it. She is enjoying being in a home and spending time as a lapdog.
By Christelle L. Del Prete 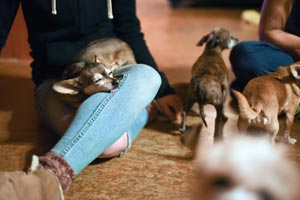 Curled up in a blanket on an armchair, 16-year-old Chiquita the Chihuahua looks so comfortable in Dogtown caregiver Shauna Saling’s living room that it seems as if she's been there her entire life. But in fact, the little dog has only been enjoying some sleepovers with her caregiver since mid-October, when she was brought to the Sanctuary.

A bowl of food and a warm bed

Before that, Chiquita was in a shelter where she had little chance of finding a home because of her age, though she doesn’t look old. Her eyes are clear and there’s hardly any grey on her muzzle. She does have bad knees that slow her down, and she prefers to curl up in her bed or on a warm lap and sleep, rather than run around.

But that’s OK, because Chiquita revels in home life. And, as a “super senior,” she doesn’t ask for much. “Give her a bowl of food and a warm bed, and she is happy,” Shauna says. Like many senior dogs, Chiquita is house-trained and seems to instinctively understand house rules. She’s perfectly happy with short walks or romps in the yard. She’s an expert at cuddling and, as Shauna puts it: “She soaks up love and attention like a sponge.”

Fitting in with the pack of little dogs 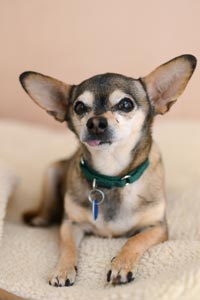 She’s in good company. Shauna has four other dogs close to Chiquita’s size, so Chiquita blends right in with the pack. She gets along just fine with them, and also with the small dogs with whom she shares a room at the Sanctuary. But that doesn’t mean that this little lady can’t hold her own and assert herself when she needs to.

Though most other dogs respect her and give her space, she isn’t afraid to put them in their place if she feels too crowded. She also has enough confidence to ask for attention when she needs some. If she thinks the other dogs are getting more attention than necessary, she’ll slowly reach out with her paw to ask for more. “She’d be great in a home with other dogs, but would also do fine as an only dog,” Shauna says.

As long as Chiquita gets to be a lapdog and live out her golden years in comfort, she’ll be grateful. Right now, she’s thriving in a home environment. She’s put on some (healthy) weight and loves to eat, even though she’s missing most of her teeth. She also likes to lounge around and watch TV on the couch, or fall asleep on bed pillows.

Chiquita knows what it feels like to be an unwanted and overlooked dog, who could have been killed in the shelter just because of her age. But all that’s behind her now. She’s getting her second chance and, if the kisses she gives to her caregiver are any indication, she’s loving every minute of it.

Update: Chiquita now has a home to call her own. She has been adopted!