Since the Susan G. Komen 3-Day (a walk to raise money for breast cancer research) would go right past Charlotte's San Francisco home, the considerate nine-year-old thought that maybe she should hand out water to the people doing the 60-mile trek. But then, because she was thirsty, Charlotte started to think about lemonade and of having a little lemonade stand right in front of her house. There was only one hitch: The Susan G. Komen walk was a charitable event, and Charlotte figured it wouldn't be fair to keep whatever money the lemonade stand generated.

All proceeds go to …

As Charlotte's mother, Judy Wade, a Best Friends supporter, helped her set up a card table in front of their house, Charlotte thought about her upcoming trip to Best Friends. It was to be her first volunteer experience here, and she had wanted to make a donation ever since seeing a Sanctuary wish list in an issue of the Best Friends magazine. She originally considered allocating part of her allowance money to the cause, but the lemonade stand seemed like an even better idea. Since she would be collecting the money during the Susan G. Komen walk, Charlotte decided that she would split the proceeds evenly between that foundation and Best Friends.

Mother and daughter set to work designing a bright and attractive pink sign to complement the breast cancer awareness theme. They made lemonade and baked cookies. Though Charlotte points out that the lemonade was "normal lemonade," and not pink lemonade, the cookies had pink (raspberry) sugar on top. She ended up selling so many 50-cent cups of lemonade and cookies that she was able to raise $60 for Best Friends. Proudly, Charlotte sealed the money in an envelope and brought it with her to the Sanctuary. 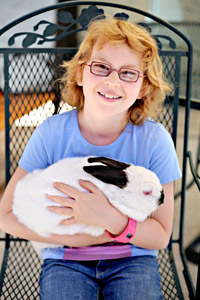 Charlotte's visit to Best Friends began on a Tuesday in June. She and her mother spent a day volunteering in the Bunny House, and the following day they did a shift in Cat World. Though Charlotte raved about her experience working with the bunnies, she seemed to find her niche caring for the special-needs cats in Benton's House, a building in Cat World. One of her favorite cats was Rio, a pretty orange tabby whose back legs are paralyzed. Her volunteer duties included feeding and walking the cats, and even taking one cat, Sonya, for a stroller ride. After all their hard work, the mother-daughter team got to love on some kittens in Cat Headquarters.

Charlotte attributes her love of animals to her grandmother, who volunteers at the Humane Society for Inland Mendocino in California. There's no doubt that this bright, enterprising young woman will continue to carry on the tradition her grandmother has set. Besides her visit to the Sanctuary, Charlotte spent two weeks at a humane education camp this summer. She and her mother plan to continue their support of Best Friends and to look for more opportunities to do good back home in San Francisco.

Learn more about volunteering in your local community.