Image
Orange tabby cat has a genetic condition called radial hypoplasia that affects the bones in his legs, causing them to be short and a bit twisted.
By Christelle L. Del Prete 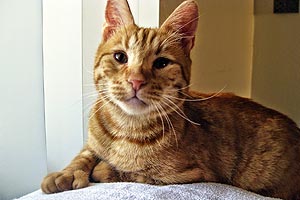 For Arnie the orange tabby cat, the path to the perfect forever home has been long and winding. Even though he was born with back legs that don’t quite do what he wants them to, he’s not one to get depressed. Even when he lost his home and ended up at the animal shelter, he was still chipper and ready to play.

Arnie is adorable and only three years old, but special-needs pets like him are often overlooked in shelters. So Arnie came to the Sanctuary, where he’d be safe and loved for as long as it took for him to find his forever home.

Cat World caregivers welcomed him with open arms, and he wasted no time in charming everyone. “You couldn't see him and not fall in love with him,” Cat World caregiver Cassie Rowell says. He was born with radial hypoplasia, a genetic condition that affects the bones in his legs, causing them to be shorter than normal and a bit twisted. Because of the way they look, and how they walk, cats like Arnie are sometimes called “twisty cats.” Arnie’s not only extremely cute and sweet, but he’s plenty spunky too. Despite the fact that his back legs are rather flipper-like, his front legs are extremely strong. He can move around just fine.

A perfect adopter for special-needs cat

While Arnie was acclimating to life as a lobby cat in one of the buildings in Cat World and keeping his caregivers entertained, he had no idea that someone was dreaming of the day she could bring him home. JoAnn Kimball, who had seen a picture of Arnie on Facebook, says, “Arnie was so sweet and quirky looking, he melted my heart.”

JoAnn, who is very active in a local rescue organization and once rehabilitated a paraplegic dog, knew that Arnie's condition wouldn’t be a problem for her. And she couldn’t wait to bring him home. But first, Arnie would need some major veterinary care — a full dental extraction of his damaged and infected teeth.

This didn’t deter JoAnn either. She knew that Arnie would be the perfect addition to her family. She kept in constant touch with Best Friends adoption specialists until Arnie recovered and finally went home to her at the beginning of August. 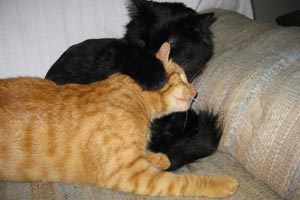 Arnie is finally in his perfect forever home, and JoAnn’s family is complete. After being successfully introduced to his doggy and kitty brothers and sisters over several weeks, he’s now got an all-access pass to his new house. Says JoAnn, “Arnie is amazing. Every day he becomes bolder and more playful. He is really active despite his condition.” JoAnn describes how he zooms throughout the house incredibly fast. These “zooms” sometimes also include “an amazing sprint up the back of the sofa and into a window.”

After inspecting every square inch of his new home, Arnie’s decided he’s very happy there. He even roughhouses daily with siblings Pearl and Clancy. “He charms everyone, overcomes any obstacle in his way and continues to steal everyone's hearts here,” JoAnn says. “He's adjusted perfectly to his new home.”

To help more animals like Arnie go from homeless to home, become a Best Friends member.