Sweet pit bull terrier is made for the shade

Image
White pit bull dog has medical issues, allergies and sensitivity to the sun. Poor sweet doggie! She is getting help at Best Friends Animal Sanctuary.
By Nicole Hamilton

Jenny, a six-year-old white pit-bull-terrier mix in Los Angeles, may have a skin condition that limits her time in the sun, but that doesn’t stop her from sharing her sunny disposition with everyone she meets, until she lands her forever home.

In fact, no matter what the day brings, Jenny leans toward happiness with a generous wag of her tail. Even a visit to the vet is a chance to shower people with kisses. Check out Jenny in action.

But that wasn’t always the case. Every day, more than 9,000 dogs and cats are killed in America’s shelters, simply because they don’t have safe places to call home. And Jenny could have been one of them — especially because when she arrived at a Los Angeles city shelter, her skin was scarred and blistered. It was clear she would need a lot of help to get healthy.

The good news is that Jenny was brought to Best Friends, where her luck turned around. Now she’s well on her way to her next stop: a home.

Helping a dog feel comfortable in her own skin 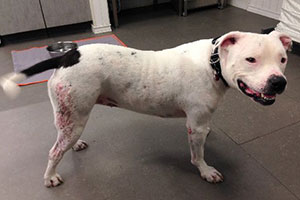 When Jenny arrived at the Best Friends Pet Adoption and Spay/Neuter Center in Los Angeles, the medical team got to work determining the cause of Jenny’s badly damaged skin. She also had a painful ear infection that needed treatment. They’d soon discover that she suffered from environmental and dietary allergies, as well as sensitivity to the sun. Today, Jenny must avoid direct sunlight as much as possible, take medicated baths and stick to a hypoallergenic diet.

In spite of all that, Jenny just seemed happy to be alive and surrounded by nice people who wanted to help her. Best Friends veterinarian Dr. Andrea Winhoffer is impressed with how calm and happy Jenny is — even during painful procedures on her ear canal. “She is an extremely sweet girl despite everything she had been through,” says Dr. Andrea. “She loves being touched and given affection, even if it’s to take her medicine.”

Once Jenny’s immediate medical needs were under control, she moved across town to Best Friends’ NKLA Pet Adoption Center, where she’d meet another friend who has made Jenny’s comfort and happiness her mission. 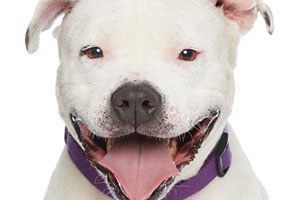 When Jenny arrived at the NKLA center, she immediately captured the attention and heart of volunteer Kate Shelley. Because Jenny wasn’t treated for her allergies before coming to Best Friends, she has some scarring — particularly on one of her hind legs. But since it doesn’t bother her, it doesn’t bother Kate, either. “We all have a few scars,” says Kate. “It just happens that Jenny’s are visible. Her heart isn’t scarred — that’s for sure.”

Kate couldn’t adopt Jenny because she had a senior cat at home who prefers a house without dogs. So, Kate immersed herself in learning everything she could about Jenny’s skin condition. She even took Jenny to a veterinary dermatologist to make sure that Jenny had everything needed to live comfortably.

The dermatologist’s findings were in line with what had already been determined, and they also revealed the source of the dog’s skin troubles. Jenny has solar dermatitis (which means she’s allergic to the sun) and they also learned that she will stop at nothing for kisses. Even medical procedures are fair game for snuggles and face licks.

To help with Jenny’s sun allergy, Kate ordered a sun suit from a company that specializes in clothing for dogs just like Jenny. She also signed up to give Jenny her regular baths and walk her (either indoors or when the sun isn’t at its peak). “Jenny doesn’t live in a bubble,” says Kate, “In some ways, her condition is no different than that of a person with sensitive skin who needs to take extra precautions.”

Katie O’Shaughnessy, lead pet caregiver at the NKLA Pet Adoption Center, says that volunteers like Kate — who go the extra mile for pets until they are adopted — play a big role in helping center pets like Jenny find their forever home. “Kate is Jenny’s champion,” says Katie. “We are so grateful that she was willing to do so much for Jenny.”

Next stop: A home 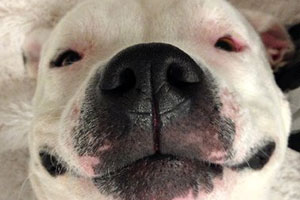 Of course, everyone’s greatest dream for Jenny is a home with someone who sees past her outside appearance and troubles, and goes straight to her radiant personality. With so many people on her team, her day will come. In the meantime, she’ll keep on winning over everyone she meets.

“You just can’t get depressed around Jenny,” says Kate. “Her love of life is contagious. Nothing holds her back from being happy.”