Image
Pit bull's adorable and fun birthday photos on Instagram capture the heart of a woman who then adopted him.
By Celia Soudry

Bringing a new pet home normally requires lots of patience, along with slow, careful introductions to your current pets. But that's not how it happened with Joe.

“He barreled into our lives like he barreled into my heart,” says Pamela Sapio, an Atlanta-based writer who discovered the newest addition to her family through Best Friends Animal Society’s Instagram account, one of many rescue accounts she follows. After hours of scrolling through cute dog photos, one in particular cut through the noise.

Joe, a 53-pound pit bull whose favorite toy is a peanut butter Kong, was a long-term (more than a year) resident of the Best Friends Lifesaving Center in Atlanta who’d been transferred there from Dekalb County Animal Services. Still, he was playful, energetic and a staff favorite — so much so, that for his seventh birthday the team threw him a festive party, replete with hats, bones, treats and a quickly vanishing birthday cake.

Pamela believes in love at first sight and knew immediately after seeing Joe’s online birthday party photos and reading his story that he had to come home with her. She asked staff at the center about Joe. Soon Pamela, her wife and two dogs had a meet-and-greet with Joe, and that was it. They brought him home shortly after and Joe never looked back.

Joe immediately wanted to play with his brothers and be near them, so separation was out of the question. “He's such a snuggler,” says Pamela. “At first, he'd timidly follow them around in the yard learning their personalities and their routines, but within a few weeks he came out of his shell and is now just one of the goobers.” 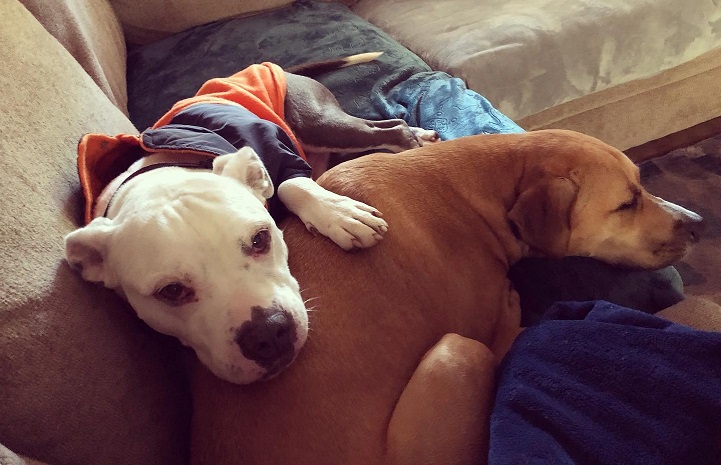 Diamonds in the rough

Many dogs like Joe are overlooked in shelters because of age, breed or health conditions. Pamela is more determined than ever to put the misconceptions to rest. “He requires eye drops in the morning and evening (because of chronic dry eye),” she says, “and that's another reason people didn't want him — even though he's a perfect angel about the drops and sits very still.” 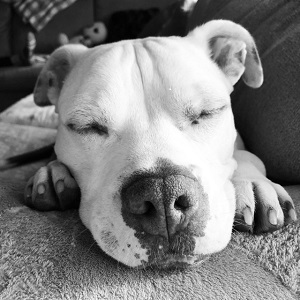 Joe's only demanding trait is his constant need to be snuggling. Wherever you are and whatever you're doing, Joe would like to be on top of you.

“He's got a lot of energy, which is common for dogs in a shelter environment because we can’t give them as much exercise as he would get in a home,” says Erin Miner, marketing specialist at Best Friends in Atlanta, noting that Joe is an easygoing charmer who did well at events. “He got really excited when people came to visit him, which is probably part of the reason it took so long for him to find a home,” she says. “He just seemed crazy in the kennel, but it was all from excitement.”

The birthday that changed everything

Volunteer Christie M. Lynn took Joe to a “dog-day-out event” to get fresh air and to meet more people, with the hope that someone might want to adopt him. “He was an angel in the car and around the people and dogs at the festival,” she says. “He even participated in a pumpkin pie eating contest!”

In anticipation of questions from the public at the event, Christie looked up Joe’s details and saw that his birthday was coming up on October 17. She thought it would be fun to have a party to treat him and get cute attention-grabbing pics for the social media team to use.

Because Joe’s birthday was on the same day as Jamie, a volunteer, Christie made cupcakes in the shape of “J” to honor them both. “I couldn’t resist getting him a chalk sign, like a real birthday boy would have for his photos,” she says.

“Joe ran around, sniffed everything, made a mess of our tablecloth and was very interested in his cake,” Christie says. “A highlight was when he dug into, then stole the cake from the table. He knew it was all his! Another special moment was when he let us put two party hats on him at the same time. He was so gentle and patient.” 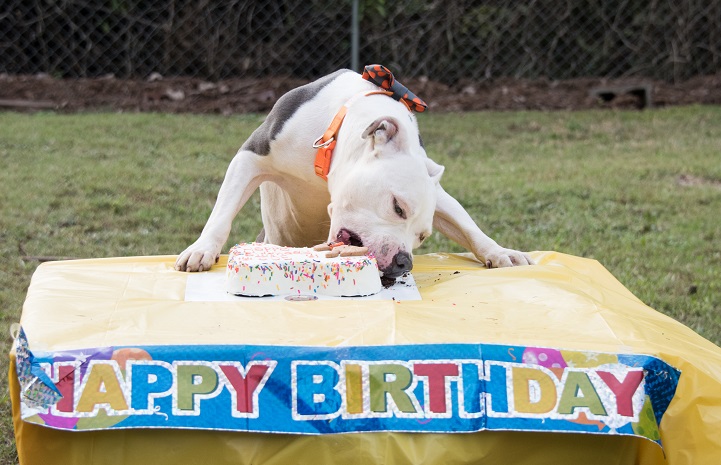 The photos showed a side of Joe that was difficult to see when he was frustrated in the kennel. 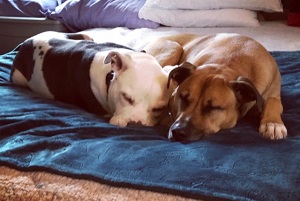 When asked how her life has changed now that Joe has joined the family, Pamela says: “The only change is that I walk the boys in shifts now, because it's a bit harder to walk three at once. Other than that, Joe eats, sleeps, plays and snuggles just like his brothers, and our family is just one beautiful soul bigger.”

Now, Joe proudly wears his holiday knits and sneezes when it's too cold outside. “I trimmed his nails for the first time yesterday and he didn't move at all! Such a good boy.”

Last year, Joe came to Best Friends the week before Christmas and this year he settled into his forever home, just in time for the holidays.