Image
Tabby community cat recovers from medical crisis - he had a severe respiratory infection, his belly was swollen, and his blood glucose was too high.
By Christelle L. Del Prete

When Michael came to Best Friends Animal Sanctuary through Best Friends’ community cat program, no one knew what had happened to the sweet nine-year-old tabby cat, or if he would survive. His nose was so blocked that he had a hard time breathing normally, his belly was swollen, and his blood glucose levels were off the charts. Poor Michael was so sick he could barely hold himself up, and he was far too weak to eat on his own. 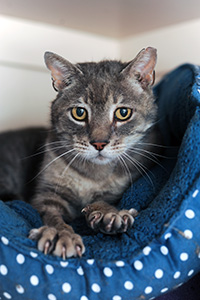 Though Michael’s chances of survival were not very high, the Best Friends veterinary team wasn’t about to give up on him. Working quickly to stabilize him, they put him on a feeding tube, gave him antibiotics for the respiratory infection, and pumped fluids to treat his dehydration. Because his glucose levels indicated that he was diabetic, they also gave him insulin. Having done everything they could, they made him comfortable, watched him closely, and waited.

Slowly, Michael began to respond to the treatment. The respiratory infection eased up in response to the antibiotics, and he could breathe normally again. As soon as he felt better, he even began eating on his own, so the feeding tube could be removed. And, once he got some solid food into him, his blood sugar levels began to stabilize. In fact, the numbers fell so low that they were within the normal range, and Michael no longer needed insulin.

Michael’s medical crisis happened in mid-March. By mid-April, he was well enough to move out of the medical building and into the lobby of one of the cat areas. His new caregivers are so impressed by his recovery that they call him a miracle cat.

Community cat who loves the company of people 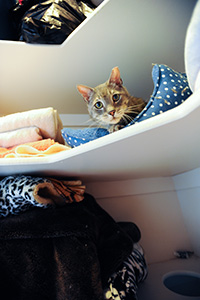 But Michael still needed plenty of rest after his ordeal; he was still in recovery mode. So he found the coziest spot he could and took up residence there. Now, the large, open closet, stacked high with fuzzy fleece blankets, is Michael’s castle. Besides the blankets, he’s even got a cat bed in there, and his caregivers serve him his meals in that bed.

Michael welcomes visitors to his comfy castle. Since he’s a social eater, he likes people to stay with him while he’s having his breakfast and dinner. And, although he was a community cat (meaning he was a free-roaming outdoor cat), and it’s uncertain whether he ever lived in a home, he’s very friendly and social and clearly craves human affection. He’s never happier than when someone is there with him, scratching his chin and petting his head. Whenever someone stops petting him, he’ll give that person a look as if to say “Hey, where are you going?”

Luckily, in addition to the attention he gets from his caregivers, there are plenty of volunteers who are more than happy to accommodate him. He even went on a sleepover with a first-time volunteer who fell in love with him. It was Michael’s first sleepover, too, and the Sanctuary’s 3,000th cat sleepover. But Michael didn’t know anything about this milestone. All he knew was that he loved sleeping in a real bed and soaking up affection. And, if that sleepover was any indication, Michael will be invited on many more. He truly is the comeback cat.

Learn more about how Best Friends gets animals well and ready for homes at bestfriends.org.