Sometimes things are just meant to be. That’s what happened when the students from St. Michael’s College in Vermont attempted to visit Best Friends Animal Sanctuary in January.

The group traveled all the way to Chicago’s O’Hare airport and was scheduled to fly to Las Vegas for the drive to Kanab. They were even on the plane, ready to go; however, something was missing – a pilot. And, as they continued to wait, a blizzard blew in that left the students stranded in Chicago for four days. The trip was off and they were forced to return home.

Experiencing airport hotels and wind chills of minus 43 degrees was a far cry from volunteering with lovable Sanctuary animals. So when a make-up visit was scheduled in May, those who could go jumped at the chance. 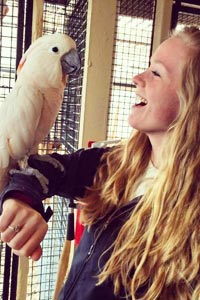 Casey Ciapciak was one person from the original group who never made it past frigid Chicago, so finally getting the chance to travel all the way to the Sanctuary was rewarding by itself.  Finally there, she was excited about meeting the pigs, horses and dogs, but not especially interested in parrots, feeling that birds were boring compared to other animals. She soon discovered that she couldn’t have been more wrong – a lesson learned from Seppi, a Moluccan cockatoo.

“Seppi would look at us and make some weird head movement and we would laugh,” says Casey. “When we would laugh, he would laugh. He clearly knew what he was doing, enjoying all the fun and laughter with us. I just never knew how much personality birds could have.”

Stacy Fender, the college’s staff representative, arrived at the Sanctuary anticipating hard work and bonding with homeless pets like Taj. However, she didn’t anticipate just how much she would learn, right along with the students.

A discussion on breed-discriminatory laws led by Ledy VanKavage, senior legislative attorney for Best Friends, really got Stacy thinking. A landlord back home, she welcomes all pets, as long as they have responsible people. She was interested in how she could influence fellow landlords to open their rentals to all pets, regardless of size or breed. Additionally, she wanted to learn how to interact with people who are irresponsible with their pets and turn such meetings into teachable moments. She picked up valuable new information to take back home to Vermont, where it will go a long way toward helping pets and people.

All creatures great and small 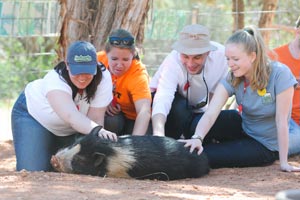 “I think Best Friends’ message – that we can Save Them All and that every animal matters as an individual no matter how big or small -- is so important,” says Greg Hamilton, the group’s student leader.

The group took that lesson to heart and got the opportunity to prove it. One of their many projects was cleaning up a dog park pool, which had a lot of debris in it after the winter.  The idea that all life has value — instilled during their time at the Sanctuary — gave the students pause when they found a black widow spider during the cleanup. “We actually picked up the spider with a shovel and relocated it,” said Casey. “It was amazing.”

It’s that kind of thinking that will serve animals well once the students return home and are back in school. “They (our volunteers) come to play with the pets, but Best Friends injects educational talks into their visit about what they can do along the way,” says Stacy. “You’re building an army of advocates through volunteerism.”

The Best Friends Learning Experience can provide a unique educational opportunity for your school or group.

Photos by Molly Wald and courtesy of Casey Ciapciak