Teaching a hesitant bird to step up

Image
Cautious double yellow-headed Amazon parrot learns to trust people more and then step up on to a caregiver's hand and arm.
By Christelle L. Del Prete 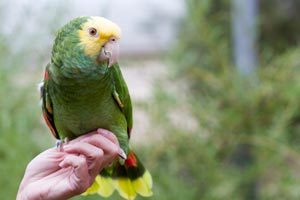 Her name may be Little Feather, but there’s nothing tiny about this parrot’s personality. It’s as bold and beautiful as her striking green and yellow plumage. She’s a comedian, entertaining her caregivers and adding to the happy, lively atmosphere in Parrot Garden. But Little Feather needed some help along the way to become as happy as she makes everyone else. Parrot training was about to pay off in a big way.

A double yellow-headed Amazon, Little Feather is extremely intelligent and interactive. She talks, sings and whistles all the time. She’ll say her name, sing “La, La, La,” and send her caregivers running for the phone by mimicking the ringtone perfectly.

But as lively and outgoing as she is, Little Feather lacked confidence around people. While she likes them and wanted their attention, she didn’t trust humans enough to risk stepping up onto people’s hands. That may be because Little Feather was raised in a home with a large number of birds, where she wasn’t handled much.

Little Feather’s caregiver did the best she could for the birds, but was overwhelmed and didn’t have time to teach the whole flock this important skill. So Little Feather and a few of the others came to the Sanctuary for some one-on-one attention and crucial social skills that will help her be comfortable around humans throughout her life.

Establishing trust by teaching bird to step up

Stepping-up, first and foremost, is a way of establishing trust and bonding between human and bird. But there were other practical reasons why Parrot Garden caregivers wanted to help Little Feather become brave enough to climb onto their hands.

Besides making her more adoptable, this leap of faith would also increase her quality of life. Once she was able to sit calmly on a hand or an arm, she could be carried to the outdoor enclosures on nice days to enjoy fresh air and sunshine.

The first priority in getting her there was to build a relationship and increase her level of trust. Parrot Garden caregiver Stacie Cornbleth spent several months giving the cautious parrot extra attention, talking and singing to her constantly whenever she was near.

A hand as a safe and stable perch 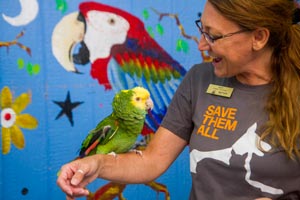 Little Feather began to get really excited and vocal whenever Stacie was around. At that point, Stacie began to familiarize Little Feather with her hand, waving it a bit to get her attention, then keeping it still so she would know it was a safe and stable perch.

Finally, one day, Stacie sensed Little Feather was ready to take her big leap. Sitting on the floor below her cage, while the curious parrot perched on top, Stacie began singing. Then she used a colorful rope toy and an almond to entice Little Feather to climb down to her.

Attracted by the colorful toy and the tasty treat, Little Feather began a slow but purposeful descent. At the last moment, she seemed unsure about taking the final step. Tilting her head and eyeing Stacie’s outstretched hand critically, she extended first one foot and then the other.

Praising a parrot for her bravery

Excitement filled the room. Stacie and the other caregivers cheered and praised the parrot for her bravery. And Little Feather quickly accepted her reward. But she didn’t eat the almond right away. She held it in her mouth as she was carried up the stairs from the main room into the Parrot Garden kitchen where more accolades awaited her.

It was Little Feather’s big day and she proudly showed off her new skill. She stepped from Stacie’s arm right up onto another caregiver’s hand before finally stepping off to enjoy her treat. And, when she was done, she stepped right back up again. Now bravery can be added to her long list of good qualities.