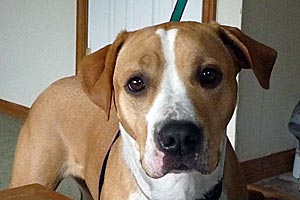 For nearly 50 years, an antiquated county ordinance prohibited the adoption of pit bull terriers or any dog resembling a pit bull terrier from Loudoun County Animal Services in Waterford, Virginia.  But that all changed following a collaborative effort between Best Friends Animal Society and local animal welfare advocates determined to reverse the old, outdated policy.

Getting there wasn’t easy. In 2007, the animal services staff approached the Loudoun County Board of Supervisors to change the ordinance, but their 18-month effort was unsuccessful. Though the final decision was disappointing, some progress was accomplished. The board decided to at least allow the transfer of adoptable pit bulls to other shelters and rescue partners. And according to Thomas Koenig, director of animal services, the staff’s resolve to change the ordinance remained as strong as ever.

“One good thing was that the department was allowed to transfer adoptable pit bulls,” says Thomas, “and over the last several years (our partners) really stepped up to assist us in the transfer of nearly 100 pit bulls.”

Working to save all dogs

But even that decision eventually proved problematic because the policy allegedly violated Virginia state law. An expensive and arduous legal process took place over the next 18 months and rather than changing the hearts and minds of the board, it seemed to make board members even more determined to continue the ban on pit bull terrier adoptions from the shelter.

But Michelle Zebrowski, an advocate with the Loudoun County Animal Advisory Committee, was determined to fight for change.  A 15-year veteran of animal welfare, she had worked with pit bull terriers for 10 of those years and had hands-on experience with adoptions of all types of dogs, including terrier mixes.

Michelle recalls one adoptable dog who reaffirmed her belief in advocating for more adoptions. “He would lie down on the sidewalk with his paws hanging over in a sphinx-like pose,” she says. “He delighted everyone and folks were vying to adopt him.” 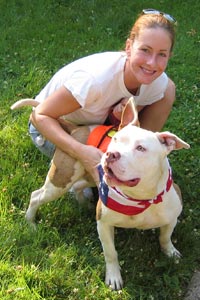 Michelle worked with Kim Fields, president of the Humane Society of Loudoun County, to address the ongoing breed ban. Kim attended a conference put on by the Virginia Federation of Humane Societies where the keynote speaker was Ledy VanKavage, a senior legislative attorney for Best Friends and a national expert on breed ban ordinances.

Hearing Ledy speak, the light bulbs went off. “I approached Ledy and asked if Michelle and I could talk with her more about what was going on in Loudoun County and (see) if she could help in any way,” says Kim. “She gave us a very enthusiastic yes.

Nearly eight years of teamwork finally paid off. In May, the board voted to change the policy in favor of allowing the shelter to offer direct adoption of pit bull terriers to the general public.

The Loudoun County change is typical of other areas of the country, according to Ledy. “The trend is to see more pit bull terriers offered for adoption instead of killing them based on breed stereotypes. It’s a good change, because the unnecessary killing of pets is not only bad for morale but also bad for the community.  We are thrilled to be a part of this positive outcome.”

Calculate cost of a breed bad for your city.

Photos by Nick Wasser and courtesy of Michelle Zebrowski