Image
Sadly, for some reason, nondescript darker dogs are often overlooked in shelters. Even ones with cute, goofy ears!
By Best Friends Animal Society

During the recent Best Friends Dog Behavior and Handling Workshop, 22 participants visited an animal shelter in Hurricane, Utah, as part of their hands-on training. Before they left, they were allowed to pick one dog to bring back to Best Friends. 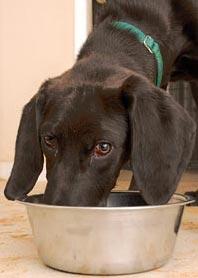 Gilligan, the lucky dog they picked, is a four-month-old Lab/hound mix who was found running around on the streets. This silly-looking puppy (hey, his ears drop into the food bowl when he eats!) is plenty affectionate and knows all too well the secret power of doggie kisses.

So why did they choose Gilligan? Well, it wasn’t easy. They found plenty of other dogs they wanted to bring back as well. But the workshop attendees also had a fairly specific goal in mind. They wanted a dog who would not necessarily be the first one picked in an adoption. Sadly, for some reason, the nondescript darker dogs are often overlooked in shelters. Even ones with cute, goofy ears!

But Best Friends is pretty hopeful he’ll win someone over soon. He’s a great catch. The only downside to adopting Gilligan (and it’s not such a bad thing) is that he comes with 22 godparents. All 22 participants in the workshop love him to death and expect reports on how he’s doing. Rest assured, though – they’ve already pledged to send him gifts as payment for news. A pretty fair tradeoff.