Things are looking up!

Image
Red Dog finds a home, and someone who truly needs him.
By Best Friends Animal Society

Sometimes when it rains, it pours. Or even worse, it hails. Life was throwing some nasty curve balls at Bud Haynes of Glenrock, Wyoming. After suffering multiple heart attacks (one of which required seven stents) and a stroke, Bud was in for even more bad news. The doctors found a bump on his lungs that could very well be cancer. 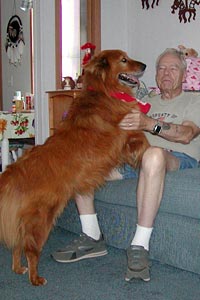 Then the hailstorm came. Bud (pictured left with Red Dog) had bought a brand new car for his wife three weeks earlier and a severe hailstorm hammered the vehicle and his house, causing thousands of dollars worth of damage. Even the most dyed-in-the-wool optimist would have a hard time staying upbeat during times like those. One happy memory, though, kept coming back to him during the rough moments: a dog he’d met months earlier while volunteering at Best Friends.

Red Dog, to be exact. Bud wouldn’t talk about anything else. At that point, Bud’s daughters (adult children, who will adopt Red Dog if anything should happen to Bud) decided they’d better try and bring Red Dog and their father together. They contacted Best Friends and arranged for the adoption.

Talk about a breath of fresh air! Bud instantly became happier and healthier the moment Red Dog came into his life. What healing powers animals can possess … and Red Dog is having the time of his life, too. He has a 3,000-square-foot backyard to play in, lots of treats, and a family who loves him to the core.

Bud and Red Dog’s story makes you wonder who really takes care of whom!