The morning of March 16, a young cottontail was enjoying life. His mother wasn’t anywhere in view. (A cottontail’s mom is normally out and about and only feeds her young twice a day.) In any case, this baby was already self-feeding.

Sadly, some well-meaning people picked up the little cottontail to "rescue" him. Assuming he must be hungry, they fed him KMR, which is a supplement for kittens. Now kittens and cottontails are really nothing alike. They have only cuteness in common. Cottontails’ digestive systems are designed for wild-growing desert plants. Feeding the cottontail the supplement caused him to have a major tummy upset.

Fortunately, the kind people brought the young cottontail to Wild Friends – Best Friends’ wildlife rehabilitation center – the same evening, which was good because Carmen Smith and Barbara Weider, both licensed wildlife rehabilitators, were able to get to work right away to undo the unintentional damage done to the little bunny. 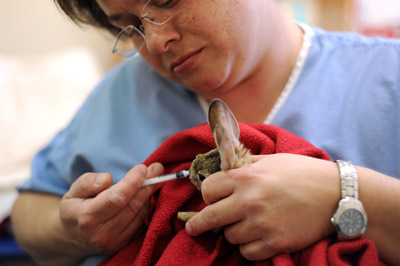 Though he arrived stressed and scared, and wasn’t eating because of his tummy discomfort, with the right care and proper food, he’s doing better now. A week after arriving, he was alert, hopping about, and beginning to eat on his own again. He has also made a new friend, who is just a bit older, and they’ll soon be released together to live a natural life in the wild.

Mishap with a cat

The second young cottontail had an unfortunate encounter with a cat — another all-too-common accident. (Both the cat and the young rabbit would have been a lot safer if the cat had been playing in a well-built cat enclosure.) The rabbit, who had suffered head trauma, was very woozy, weak, and in shock.

One of the major hazards facing rabbits who are caught by a cat is infection, which often proves fatal. Wild rabbits are very sensitive.

Though his eye had been bumped, it was not scratched. With a lot of good care and precise treatments, he is looking forward to living happily back in nature. He and his new rabbit friend will be released together.

Wrong place at the wrong time 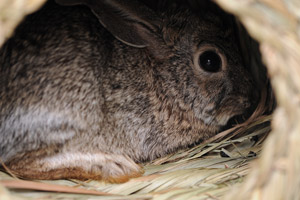 This baby cottontail is on the road to recovery.

A third rabbit brought in the same week was on the road at the wrong time when a car came along. The car struck the rabbit. Another driver spotted the cottontail by the roadside, and noticing she was alive, brought her to Best Friends. She’d suffered a serious head impact. At first, it was hard for her to stand up.

Now, after treatment, she’s getting her balance back. Both of her ears are standing up straight (instead of one lying down, which was the case after the accident), and when she heads in a particular direction, that’s the direction she intended to go. She’s improving day by day, and when she’s fully recovered, she’ll be released to resume her life and enjoy the fine days of spring.

Wild Friends receives and cares for around 40 injured or orphaned cottontails every year.

Don’t pick up young cottontails. Instead call your local licensed wildlife rehabilitator for expert advice. Don’t allow your cat to wander outside. An outdoor enclosure keeps cats and wildlife safe.Mammals often travel in groups. Slow down when driving, watch both sides of the road, and don’t tailgate.

Consider sponsoring a hawk, pigeon, or even a squirrel receiving care at the Sanctuary. Choose from a variety of wildlife friends who would be so grateful for your support.