With three kids, three newly-adopted kittens and three other fluffy family members, there's never a dull moment in this house.
By Sarah Thornton 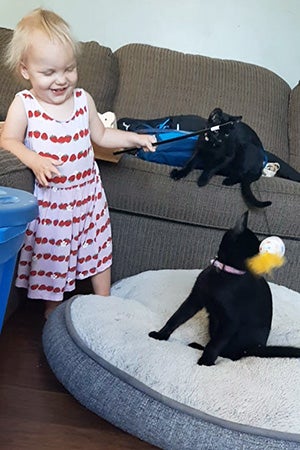 Good things come in threes and that may go doubly (or triply) for kittens. Brothers Tyrion, KeeKee and Taco Dash have certainly brought a lot of happiness to their new family, which already had another trio: Sheila and Chris Griffith’s three young children. Add in the other three fluffy family members (two bunnies and a dog) and that’s a whole lot of good things.

There’s never a dull moment in this house. The kitten-and-kid shenanigans never stop and no one is ever short of playmates.

After the family’s senior cat passed away unexpectedly, there was a strong sense of loneliness in the household. Just the year before they experienced a difficult goodbye when they bid farewell to their 21-year-old cat, but this was something different. “We had her since she was a kitten … for 15 years,” Sheila says.

What made it even harder, though, was that now there were no cats left in the house. The Griffiths weren’t sure they were ready to bring a new cat home, so when Sheila felt the pull to at least look at some feline faces, she decided to scroll through the list of adoptable cats at Best Friends Animal Sanctuary, even though the idea of a five-hour drive sounded like too much to her. Of course, if you’ve seen the title and intro of this story, you already know where this is going. 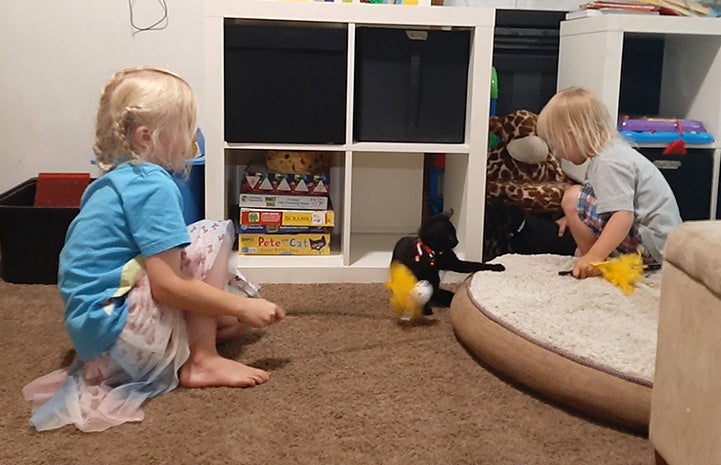 [A boy, a broken heart and a very good kitten]

Tyrion, KeeKee, and Taco Dash (so named by their new family) were brought along with their mother to the Sanctuary on a lifesaving transport with other moms and kittens, as well as orphaned kittens. The family of four black cats had gone directly into a wonderful foster home so that the mama cat could focus on raising her kittens in relative peace and quiet.

Tyrion’s face caught Sheila’s attention, so much so that she stopped her scrolling through the list of adoptable cats. With his eyes narrowed and his ears down to the side, he looked comically cantankerous for such a little kitten. “I swear you could hear through the picture: ‘Leave me alone. Why are you looking at me?’” Sheila recalls fondly. She liked that feisty little face.

Out of curiosity, she clicked on his picture and read about him sleeping in a kitten pile with his two brothers. Then she found his brothers’ profiles, and her earlier resolve about not driving five hours for a cat started to crack.

“There’s three of these kittens, and we have three kids,” Sheila reasoned. “That’s kind of perfect.” She showed them to Chris, while still insisting that they didn’t need another pet, and argued back and forth with herself for the next week. Then, she started looking into what she would need to do to adopt them, as well as the cost of driving the five hours to the sanctuary. The next thing she knew, they were planning the trip. 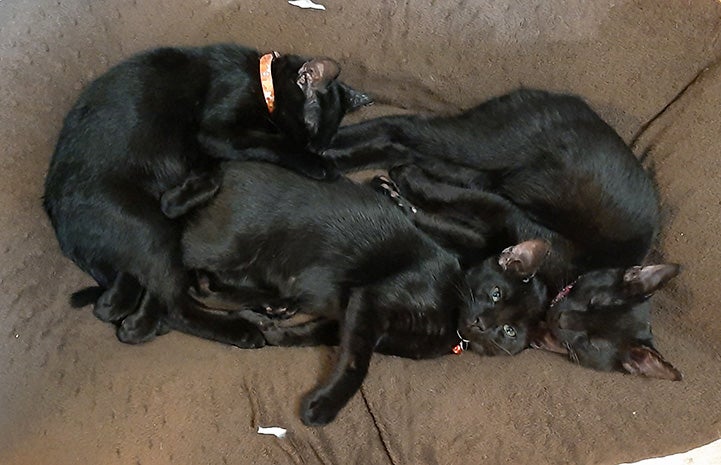 Introducing the kittens to the family

The family arrived in the afternoon to pick up the kittens so they could spend the night together in the Sanctuary cottages before heading back home. Sheila brought a pile of toys and suggested to her kids that they all sit down and play to see who the kittens went to, secretly hoping Tyrion would pick her.

It couldn’t have worked out more beautifully. KeeKee and Taco Dash picked her four- and six-year-old children (hence their new names), while Tyrion did indeed become Sheila’s buddy. All three kittens also bonded quickly with the Griffiths’ 16-month-old daughter, who was delighted by her fluffy new friends.

Back home, Sheila says the family’s 15-year-old dog wasn’t sure what to think of the new arrivals. She set up the kittens in the basement family room, since they were so small, and wanted to give them somewhere cozy to adjust. “And then when we let the dog in, he just walked downstairs and was like, ‘What are these?’ He turned around and looked at me, and the three of them puffed up bigger than I thought possible. He actually backed out of the room.”

In spite of that first introduction, the kittens started relaxing around their new, much bigger brother. They hang out with him in the Griffiths’ securely fenced backyard, and sometimes even insist that he share his spot on one of the patio chairs.

The bunnies were an easier introduction. It would be a while until the smaller kittens grew to be similar in size to one of the rabbits, a Flemish giant mix. Still, Sheila keeps a close eye on them, so that when KeeKee starts annoying the bunnies with his attempts to get them to play, she can separate them.

Eventually the kittens finally settled in and had full run of the house. That’s when the shenanigans really started. 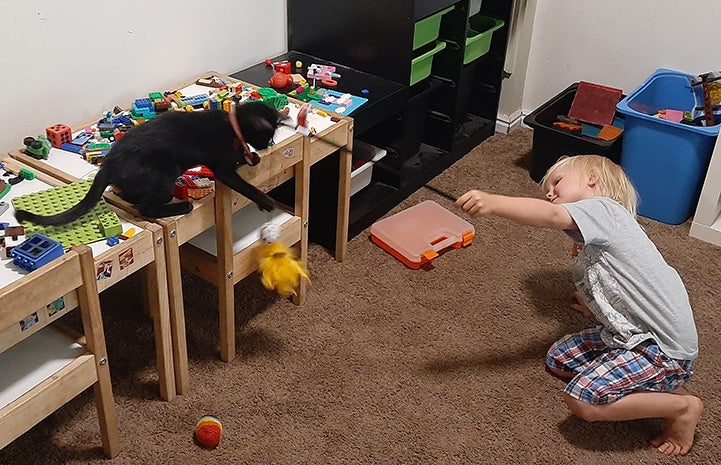 Never a dull moment with kittens

Sheila says it’s been fun watching the kittens’ personalities develop. Taco Dash has become the more reserved of the three and is content to watch as his brothers fly around the house causing mischief. True to his name, he’s also very food-motivated and will come running from anywhere in the house when he hears Sheila opening up something to eat.

KeeKee, a big snuggly baby who follows his family around meowing for attention, still tries to ride around on Sheila’s shoulders, even though he’s now a little too big for that. And Tyrion is the star of many of their family’s more ridiculous stories — turning their touch lights on and off all night so that in the morning they’re all different colors, jumping right into a bathtub full of water or getting stranded in one of their backyard trees. The Griffiths’ youngest daughter has quickly become their favorite playmate. 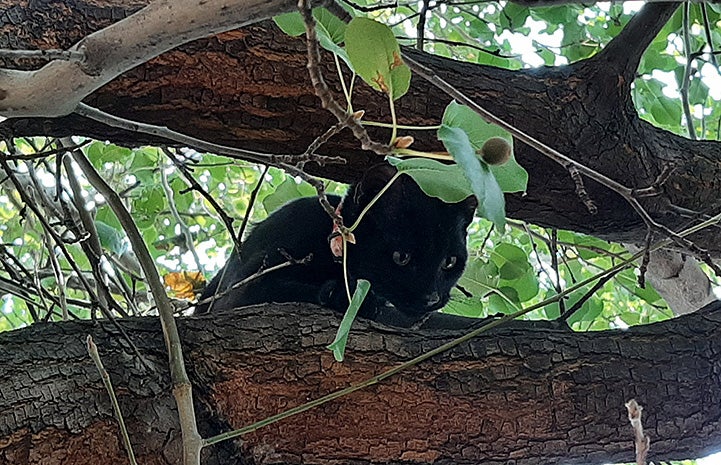 “We have paper and markers and coloring books all over the house,” Sheila says, “and a week or two ago … it looked like we’d had a party, because confetti was everywhere. Every little thing that (the kittens) could shred with their teeth, they were shredding. And my daughter thought it was the best thing ever. So she was sitting on the floor in a pile of kittens, just shredding paper with them.” 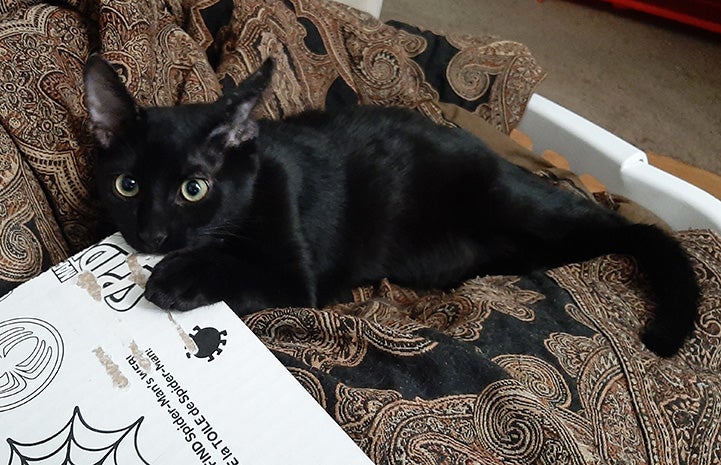 The tiny tot also loves swinging around the wand toy for the kittens, giggling nonstop as they jump and chase after it until all four of them are exhausted from playing. She sits in dog beds with them and they snuggle in close to her for naps.

Everyone in the family has fallen in love with the kittens, and the three fluffy brothers certainly seem happy with their new life. And even though Sheila might not have much privacy these days (with three kids and now the kittens as part of the follow-mommy parade), it’s a worthwhile trade-off seeing her kids growing up with such wonderful feline companions. 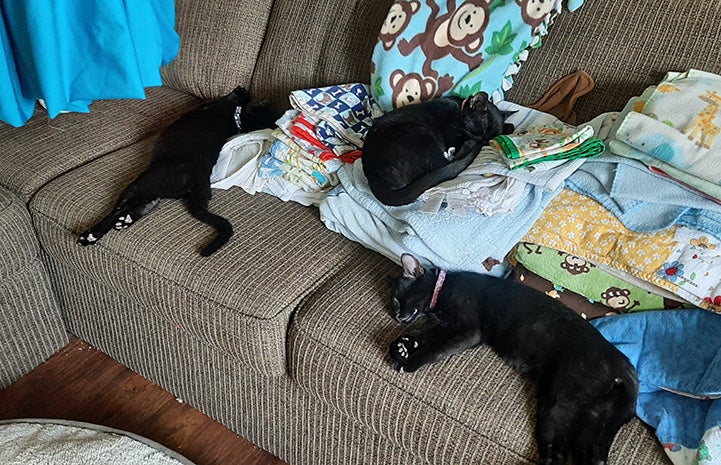 Bring some joy to your home

Whether it’s a playful kitten or a sleepy senior pooch, homeless pets across the country are ready to light up your life. You just have to bring them home.