Three-legged dog gets a new beginning

Image
Three-legged dog suffered accident that required his leg be amputated and then later was hit by a car. His future is now brighter.
By Christelle L. Del Prete

Before Long Tail came to Best Friends, he’d been dealt more than his share of bad luck. Though he wasn’t a stray, he was mainly an outside dog. And the poor guy couldn’t catch a break; he always seemed to end up in the wrong place at the wrong time.

By the time Long Tail was eight years old, two serious accidents had nearly cost him his life. But the second, more devastating accident had a silver lining. It put Long Tail on a new path in life — one that would lead him past his pain to a wonderful new beginning. 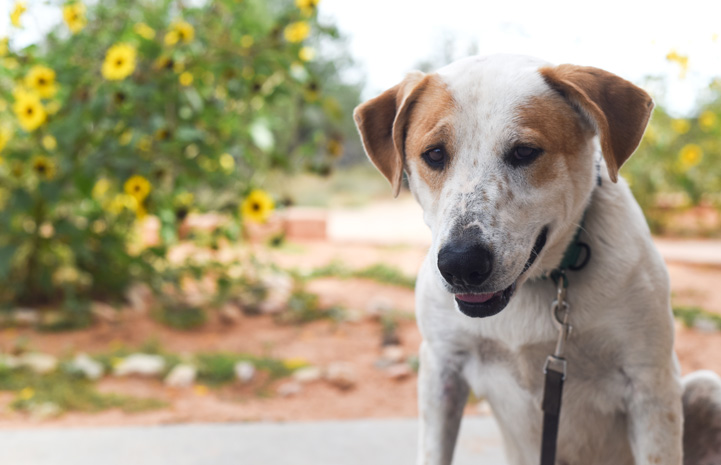 The gentle white dog with the copper spots and patches first got into trouble years ago when an accident required one of his back legs to be amputated. Like many dogs with three legs, Long Tail recovered, adjusted and did just fine. Until last July, that is, when he tangled with a moving car and came away with a broken pelvis.

The instant the new injury struck, everything changed. Long Tail was no longer able to live his old life. And the chances of him going on to live any kind of normal, pain-free life at all seemed terribly slim. Normally a chipper dog with an unbeatable spirit, Long Tail had hit his lowest point. He was in terrible pain and couldn’t walk at all. And although he was still friendly and sweet, he seemed defeated. He needed professional help — fast. So he came to the Sanctuary.

At the Best Friends Animal Clinic, Long Tail got critical pain relief. Then, because the break in his pelvis was so bad, he went to Phoenix for surgery with a specialist who often works with Best Friends’ extra special cases. After a successful surgery, Long Tail returned to the Sanctuary and began his long recovery. There were physical therapy sessions twice a day, hydrotherapy and lots of short walks in a support sling as Long Tail gradually learned how to put weight on his back leg and get going again. 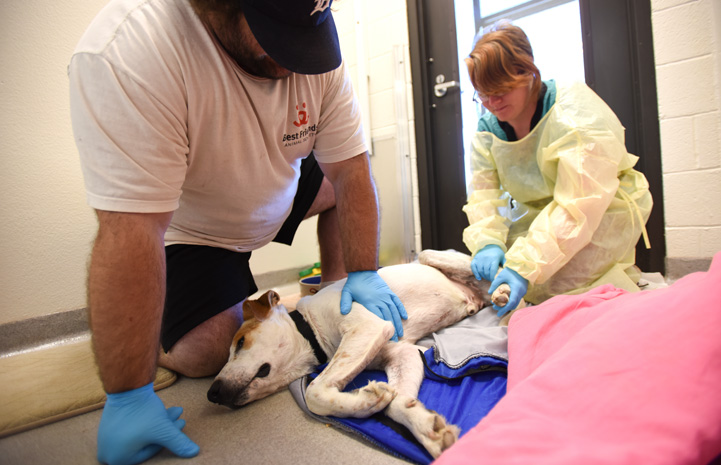 Throughout the long process, Long Tail regained his physical strength. But, even more important, his spirit, once so beaten, grew strong again. The hopeful gleam returned to his eyes and lit up his freckled face. By the time he was strong enough to move from the Best Friends Animal Clinic to Dogtown, he was his happy, peaceful self. And, while his physical therapy continued, he now had plenty of free time in his day to lounge in front of his building next to some towering sunflower plants, and greet visitors and Dogtown tour groups.

Something wonderful in store

Now that he was safe and getting the care he needed at the Sanctuary, Long Tail could have lived this new life for a long time. But something even more wonderful was in store for him. Enter Jennifer Story and Patrick Murphy. The Phoenix couple had recently lost their two senior dogs, and they missed having canine companionship. But they didn’t want to adopt just any dog. They wanted to make a special connection.

When they learned about Long Tail, they immediately knew he was their dog. “I started bawling when I read his story,” Jennifer says, “because I knew that after what he’d been through he had to be pretty incredible.” It appealed to them that Long Tail was a senior, special-needs dog and that, as Patrick says, “He looks like a regular old country dog — a sweet but serious-looking hound dog.” The fact that he’ll likely need to continue his physical therapy for life didn’t bother them at all.

But the couple had one hesitation: They didn’t want to bring Long Tail home alone. They wanted him to have a doggy friend. So they chose Musetta, a puppy mom with a captivatingly sweet face. Long Tail and his sister-to-be were introduced at the Sanctuary and hit it off wonderfully. By their second play date, they were play-bowing to each other and getting the “zoomies” — which, for Long Tail, often meant rolling playfully around on the floor, kicking his feet, while Musetta raced and romped around him.

The dogs’ new friendship sealed the deal for Jennifer and Patrick. In early December, the couple traveled to the Sanctuary to meet Long Tail and Musetta and to bring them home. Jennifer and Patrick are thrilled to have dogs back in their lives. But they are even more thrilled to have these two particular dogs — now renamed Louie and Greta. “They are both such sweethearts, and they’re a nice balance for each other,” the couple says.

At home in Phoenix, Louie and Greta are settling in to their wonderful new lives. (Click here for a video of them playing in their new home.) “Louie loves his walks, his naps and lying in the sun on our patio,” the couple says. “He's starting to realize we're his new forever home, and is really settling in. We adore him (and Greta, too!) and couldn't be happier.”

As for bringing the dogs home right before the holidays, Jennifer and Patrick say, “The timing was right, and it just worked out that way. It seemed like it was meant to be from the time we saw the dogs online. They’re our Christmas gifts to one another.”

Of course, with a new beginning and a home for the holidays, Louie and Greta also got the best possible gifts any dog could. 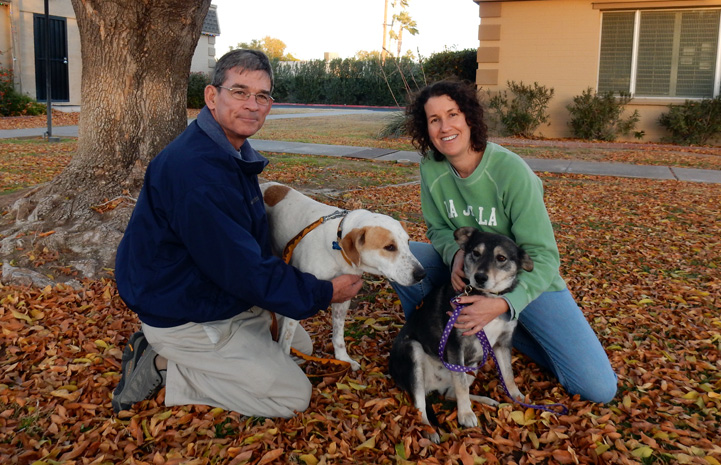 Photos by Molly Wald and courtesy of Jennifer Story