Image
Baby rabbit comes from an out-of-control rabbit breeding situation. He has an infected leg that requires amputation, but he's doing well now.
By Jennifer Hayes

Overcoming challenges and persevering helps us to be thankful for all that we have. If times didn’t get tough, we really couldn’t fully appreciate the joys in life.

Animals are no different — especially Hopsing the rabbit, who had a rough start in life and now makes the most of every day.

There’s a reason for the phrase "breeding like rabbits." Not only do bunny pregnancies only last about a month, momma rabbits can also get pregnant again within a day of giving birth. Add in the fact that litters average four to 12 babies (called kits), and things can quickly spiral out of control if bunnies aren’t spayed or neutered. Yikes!

Hopsing came from an out-of-control situation and was one of a group of rabbits who were rounded up to be neutered at the Best Friends clinic. As the boys were being caught to be fixed, a four-week-old kit was discovered in a burrow. But living in a hole was the least of Hopsing’s problems. Another bunny had bitten his leg, which got infected. 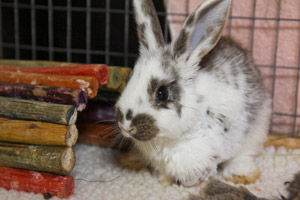 Rescue for the baby Hopsing

Hopsing went into foster care with Bunny House caregiver Debby Widolf, where he was treated for his injury. It continued to get worse, though, and the vets felt that removing his leg was in Hopsing’s best interest.

It was touch and go at first, but the little guy pulled through and returned to Debby’s home for some round–the-clock care. His recovery was remarkable.

"That’s why I think he’s so loveable now, because of all the medical care he received," says Jason Dickman, one of the Bunny House caregivers. "We had to handle and care for him on a daily basis, so he got used to being held." 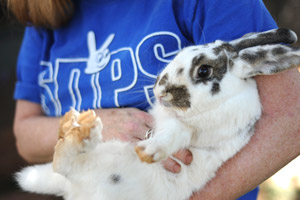 Now Hopsing lives at the Sanctuary, and he gives his accommodations three paws up. Literally.

When rabbits are really happy, they hop up in the air, doing something called a binky. Needless to say, Hopsing is one happy bunny.

Hopsing actually has a special living space at the moment created in the Bunny House hallway, and every day staff lets him out to explore. Sometimes he gets the run of the fenced-in area outside the building. When he gets to go out and play in the dirt, he experiences pure joy and does binkies galore.

He’s such a happy fellow that recently when he saw his old pal Debby, he started binky-ing just from his delight at seeing her.

With that kind of reception for his former foster mom, just imagine what kind of excitement he’d show for the person who ends up adopting him. His gymnastic routine would probably qualify him for the next Olympics — maybe even win him the gold.

Hopsing is among the many bunnies available for adoption from Best Friends.