Image
A stray tabby kitten, who is part of a TNR program in Arizona, has a badly injured rear leg that needs to be amputated but is now ready to be adopted.
By Nicole Hamilton

Sawyer may not be ready yet, but soon he’ll be able to join the family eagerly waiting to welcome him home. Until then, the kitten with polydactyl paws (meaning he has extra toes) will stay at his foster home, where every day is a chance for him to gain the confidence and strength he needs to stand on his own three feet.

Sawyer, a sweet but very timid tabby, began his life in the great outdoors as part of a colony of community cats aided by Best Friends as part of the Tucson Community Cat Project (CCP). The project is a partnership among PetSmart Charities, the leading funder of animal welfare in North America, Best Friends and the Pima Animal Care Center in Tucson, Arizona.

Sawyer was brought in to the shelter one morning after being found in a colony walking with a limp. Stephanie Stryker, the community cat project coordinator for Best Friends who was at the shelter that day, took a close look and noticed Sawyer had a severely injured rear leg and needed immediate medical attention. Sawyer’s life had just begun, and with services from the CCP, he had a chance at a happy, healthy future.

Sawyer was soon on his way to a Tucson veterinarian who provides low-cost medical care for the CCP. The vet determined that the best treatment would be to amputate Sawyer’s hind leg.

Thankfully, says Stephanie, the decision to move forward with the surgery was an easy one. While the CCP team doesn’t often come across injured colony cats, it has the ability to help if they do. “The Community Cat Project has been so successful that we now have the resources to help injured cats like Sawyer go on to live long and healthy lives.” 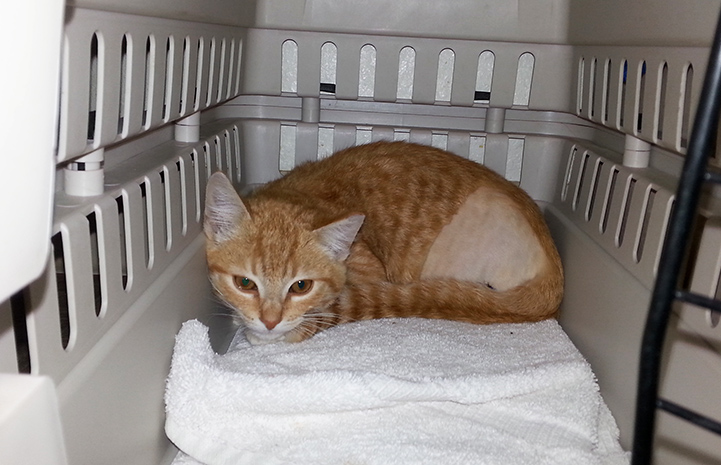 The Pima County CCP got underway in 2014 with a very clear mission: to save the lives of the area’s community cats (who were, historically, most at risk).

Through a generous grant from PetSmart Charities, the project offers free spay/neuter surgeries and vaccinations for free-roaming, unaltered cats in Tucson and the surrounding area. It has also helps to significantly increase the number of cats saved in Pima County. And that means Tucson is getting closer to becoming a no-kill city.

The project also provides trap-neuter-return (TNR) assistance for residents and business owners who care for community cat colonies in their neighborhoods. In most cases, Stephanie and her team will provide traps and instructions. But sometimes, especially if the colonies are larger, they arrive on-site to help set humane traps so cats can be brought in for an exam, spay/neuter surgery, and vaccinations before being released back where they had been living.

“When we started, the shelter was receiving a lot of complaint calls from residents unhappy about the feral cats in their neighborhoods. They wanted them gone,” says Stephanie.

But once people learned about the community cat project, they usually listened with an open mind and often wanted to get involved. “It all starts with education and awareness,” says Stephanie.

Now, without the influx of cats coming into the shelter, room and resources are available to help free-roaming but friendly cats find homes with families, as well as cats like Sawyer, who need lifesaving medical attention. 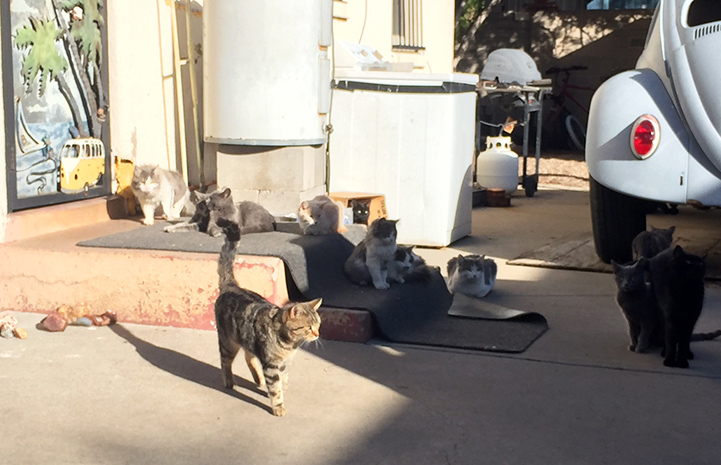 A tripod kitten’s next steps

After Sawyer’s surgery, he was brought to the Pima Animal Care Center until he was healed enough to go to a foster home, where he could make a full recovery in comfort. It was also a chance for young Sawyer to get used to living in a home and among people.

“He’s still a little timid, but has come a long way since he first arrived,” says Robyn, Sawyer’s foster parent. “He’s like a gangly teenager going through a growth spurt right now.”

It’s been a long and sometimes slow process to get Sawyer to trust humans. But with a little patience, Robyn has been able to draw him out of his shell. In fact, today, he’s getting brave enough to settle next to her for some cuddles ― a very good sign.

Sawyer has new family members waiting to adopt him, and soon he will be moving in with them. When he does, he’ll have come a long way from the day he was found injured and scared. Now he’s got nothing but a long and healthy life to look forward to.