On June 30, three very special cats went to their forever home in Texas. Ranger, Mango and Chuck all have feline leukemia (FeLV), a virus that attacks a cat's immune system. The virus makes cats vulnerable to secondary conditions or infections, such as gum disease, upper respiratory infections, and lymphoma. It is also a "social disease," which means it can be spread from one cat to another through close physical contact. Therefore, FeLV-positive cats must be kept separate from those who don't have the virus in order to avoid infecting them.

As you can imagine, this sometimes makes it hard to find good adoptive homes for FeLV-positive cats. Add to that the fact that seven-year-old Ranger, whose story was followed on the Guardian Angel portion of our website, is blind, and you might think it would be one tough sell. But not for Janet Bushey, who read about Ranger in an email and on our website and decided that she was going to adopt him - a big decision that would necessitate some household and lifestyle changes, as she already had adopted cats who do not have feline leukemia. 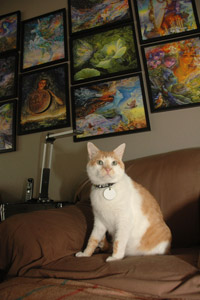 A buddy (or two) of his own

But then Janet thought that Ranger, who wouldn't be able to interact with her cats, would need a buddy of his own. So adoption specialist Lynn Dolan suggested either Chuck or Mango, both orange-and-white, FeLV-positive males. Now Janet had a problem: How could she choose between the two? In the end, she couldn't, so she decided she'd take both and adopt the whole trio.

No one knew if the three felines would get along; they were housed in separate rooms and didn't know each other. So their caregivers began slowly introducing them in the lobby of Cat World Headquarters, and, to their delight, everyone got along. The cats were now ready to go home, where Janet was busy preparing for their arrival. Originally, she was planning to put Ranger and his companion in one room with an adjoining bathroom. But now that three of them were coming, she turned a whole side of her house into a giant cat room, complete with cat trees and toys - a veritable kitty paradise.

Now the trio just had to get to Janet's home in Austin. Enter Cat World volunteer Colleen Hart. Colleen was already familiar (and a bit in love with) Ranger. So Lynn asked her if she wouldn't mind taking a road trip to meet Janet. At 5:30 a.m. on a Saturday morning, Colleen and her husband, Bill, embarked on the 13-hour drive to Amarillo, where they had arranged to meet Janet.

According to Colleen, "the boys (which is what Janet calls them) are great travelers. They all sat in the back perfectly in foldout cloth crates with screens so they could see and support each other during the trip. Janet met Colleen, Bill, and the cats at their hotel room and spent some time getting to know her new family members. Colleen saw that "it was love at first sight. Chuck went right up to Janet and started rubbing all over her. She held Ranger for a while, and he seemed very relaxed. Meanwhile, Mango was watching everything from across the room." 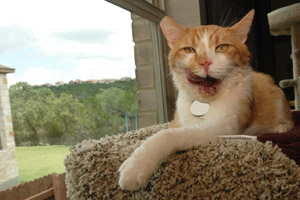 The next morning, Janet loaded the boys into her car and headed home. Eight hours later, the cats were already exploring their new digs. This is just an "awesome adoption," says Lynn. "Anytime we adopt out an FeLV cat, we celebrate, but with three," Lynn says, "it was hard not to cry."

And Colleen adds, "It was really great to be part of that special adoption."

As for Janet, she is thrilled with her new additions. The three are already under the care of a wonderful vet. Mango is recovering from a surgery (he had some teeth removed due to stomatitis), Ranger's white blood cell count is back up after a concerning dip, and Chuck is doing well. Janet says that adopting her boys was a wonderful experience and that they are "just as precious as they can be."

Get more information on FeLV.