A tiny Chihuahua named Reece was pulled from the West Valley Shelter in Los Angeles and brought to the Best Friends Pet Adoption and Spay/Neuter Center in Mission Hills, California, for one reason: to help him find his own forever home. The staff and volunteers at the center use play groups and training classes as well as personal training to address each dog's individual needs and help set them up for adoption success. Helping Reece overcome his shyness was no exception. Their work, well, worked.

On September 6, 2013, Reece not only found his family, but his adoption marked a milestone: the 4,000th adoption at the center since the doors opened on January 28, 2012. Turning Los Angeles into No-Kill Los Angeles (NKLA) is coming to fruition one adoption at a time, and Reece's journey is just one of the many on the road to saving them all. 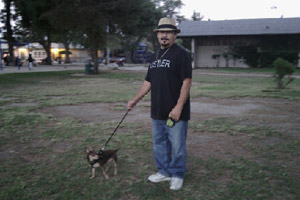 The Hernandez family was looking for a dog for their patriarch, Vicente. You see, Vicente had become attached to his granddaughter's shih tzu, Max. As part of Vicente's health and fitness routine (he was having some problems with his legs), he began going on long walks with Max. They developed quite a bond. Vicente became more athletic, and he also lost 25 pounds over a few months. He soon realized he needed his own furry friend.

"I loved walking with Max, but he wasn't my dog. We live 10 miles from the Best Friends Pet Adoption Center and we went down a few times before we met Reece," says Vicente.

The family was watching the antics of another adoptable dog at the center, Cloud, when they spied Reece's stealth moves. "Reece went over to Cloud and took the toy away. I knew he was meant to be with me," muses Vicente. Clearly, Reece had overcome his shyness issues, and then some. "When my granddaughters said 'Take him' we officially welcomed him into our family," Vicente says. 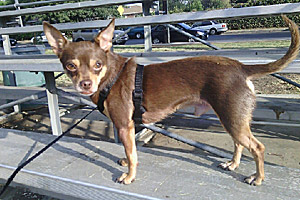 No one knows why a sweet little guy like Reece ended up in the shelter system, but his life has certainly been transformed. "He's part of the family now. Reece is so intelligent and he's getting so strong. We go on a long walk in the morning and the evening," shares Vicente. "I love cooking for him every day. We're making him as happy and healthy as he can be. He loves us and we love him." When Reece and Vicente aren't out and about, they can be found catching some TV with Reece in his preferred spot, resting his head on Vicente's shoulder.

"On our first day home, I was talking with my daughters," Vicente says, "and they explained how Reece was rescued, and then I realized I saved his life and that made me love him even more."

Reece is certainly more than a number, but we couldn't be happier to mark that special number anyway with a very special dog. Our 4,000th adopted pet has a proud new title: beloved family member.

Adopt your next furry family member in Los Angeles. Check out our adoptable cats and dogs.