Image
Tiny dachshund (aka wiener dog) with severe injuries receives intensive treatment and care at Best Friends for a deep and painful back wound.
By Christelle L. Del Prete 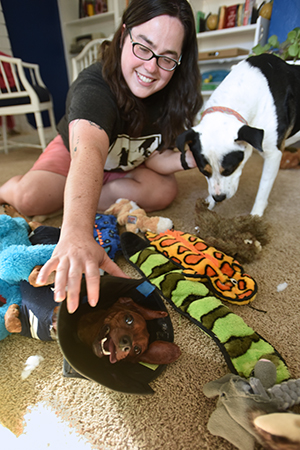 Dixon couldn’t be cuter as he trots around the Best Friends Animal Clinic on his stubby little legs — even with a big bandage on his lower back, a feeding tube that sticks out of the side of his belly and a large soft cone encircling his head. With all that, he could look pathetic. Instead, he just looks adorable and determined as a visitor leads him into a room to spend some quality time with him.

In Dixon’s short life, his tiny body has suffered some major wear and tear. In fact, the one-year-old dachshund or “wiener dog” has survived injuries that would take down a much larger dog. But this tiny guy has proven to be a fierce fighter in the battle for his life and along the road to recovery.

The little red dog was in horrible shape when he was originally taken in by a Best Friends No More Homeless Pets Network partner. No one knew what happened to Dixon, but whatever it was, he was far too thin and he had a huge, deep and painful wound on his back. If he was going to heal, he would need many months of medical care. It was more than the rescue group could give him, but Dixon desperately needed help. So he came to the Sanctuary and moved right into the clinic.

Meet other animals with special needs at Best Friends

Best Friends vets immediately went to work cleaning and treating Dixon’s injury. Sadly, it had gone untreated for some time before his rescue. In fact, it was so bad, vets couldn’t surgically close it. Dixon’s wound would have to be bandaged and rebandaged repeatedly until it began to close on its own. With daily care, it would heal eventually, so clinic staff were prepared to have Dixon as a patient for months to come.

Removing a blockage in a dog’s throat

Dixon’s clinic stay turned out to be a very good thing, because he had another life-threatening problem that wasn’t as easy to see. As Dixon settled into the clinic, staff noticed that he had trouble eating because he couldn’t swallow normally. When they examined him to find out why, they made an alarming discovery: He had a bone stuck in his throat.

Dixon had swallowed a bone sometime before his rescue, and it had become lodged in his throat. Not only did it cause damage to his throat, but it blocked food from reaching his stomach. Aside from the fact that it was painful, Dixon wasn’t getting enough nutrients, which explained why he was so thin.

With his large wound wrapped and just beginning to heal, Dixon then had to undergo surgery at the clinic to remove the bone stuck in his throat. That gave him some immediate relief, but the bone had damaged his throat. Part of his esophagus had nearly closed, and that meant Dixon needed a specialist’s help. So, once he recovered from the first procedure, he was off to Las Vegas to see a specialist. That meant several procedures to help reopen the tiny dog’s throat so he could eat normally again. 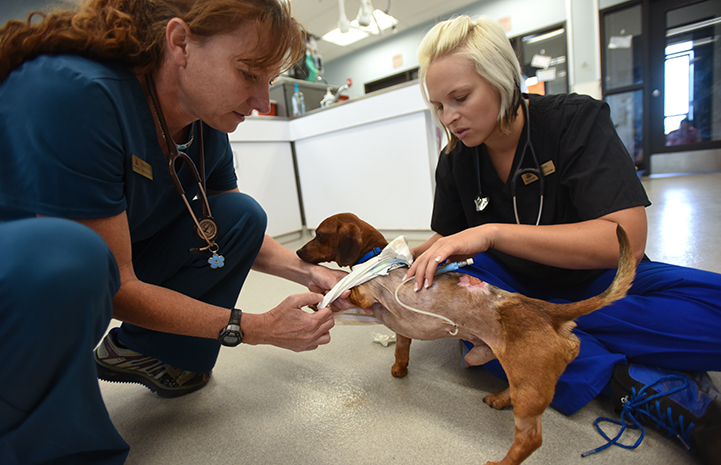 Another road to recovery

Dixon was a trooper through the whole process, and he was soon back in the Best Friends Animal Clinic and starting down yet another road to recovery. In addition to the big bandage over the wound on his back, vets placed a feeding tube in his side that would allow him to get food directly into his stomach, bypassing his mouth and throat. Until his throat healed, it was be too dangerous and painful for him to eat on his own. He started wearing the soft cone so there would be no chance he could pull out his feeding tube.

Big dog in a little body

All that medical handling would be hard for any dog, but Dogtown caregiver Haylee Heisel says that Dixon “has been perfect for every medical thing we've ever had to do to him.” Shortly after his surgery, Haylee began taking Dixon home with her at night because he needed monitoring around the clock and also needed to be fed after hours.

After his surgeries and medical treatments, Dixon has turned into a new dog. When Haylee first started bringing him home, Dixon was quiet and needed to nap frequently. Now, he seems completely pain-free and is a ball of energy. And he absolutely loves toys. Haylee has two large dogs at home, and Dixon loves to play with their big-dog toys.

“He makes a beeline for the toy basket as soon as I bring him home,” Haylee laughs. “It's a constant thing now, keeping up with a young little dachshund who is doing great and putting on weight. He is a lot of fun.” 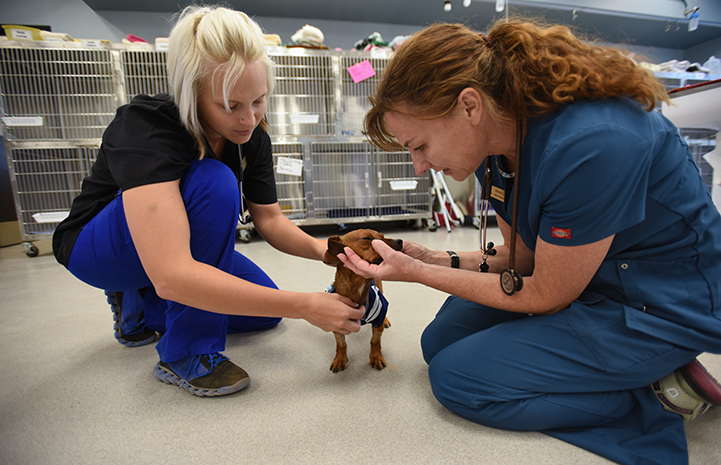 A man about town

Today, Dixon still calls the clinic home during the day and goes home with Haylee or one of the Best Friends vets at night. But he’s happy. He’s become a favorite of the veterinary staff, and he has visitors and volunteers who come to the clinic just to spend time with him.

Dixon certainly has turned into a popular social butterfly. While his experiences have made him wise, he’s still a playful pup at heart. His spirit is bigger than his body will ever be. After overcoming two life-threatening injuries, this little fellow is nearing the finish line of his long recovery. And Dixon’s got a whole crowd cheering him on.

Help bring hope and healing to more animals like Dixon 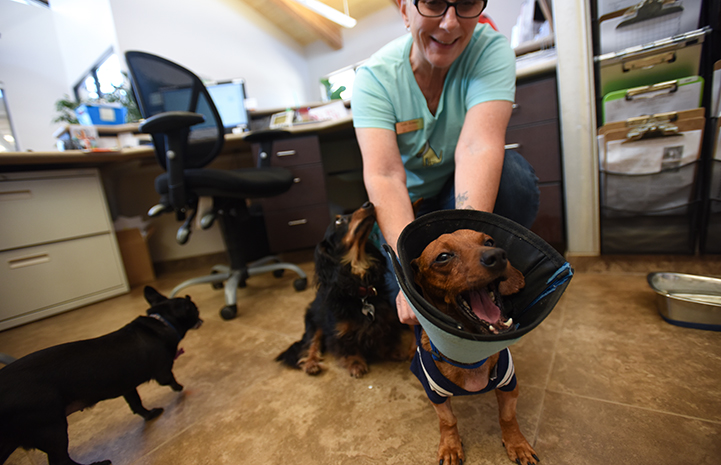