Image
Kitten with challenges - injured rear leg and hip and a luxating patella - has her leg amputated, but now is doing so well in her new adoptive home.
By Nicole Hamilton 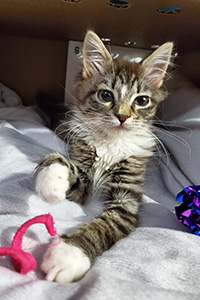 Little Tati was just days old when she found herself facing a big obstacle. In fact, the kitten had barely begun to open her eyes when she came to the Best Friends Kitten Care Center in Salt Lake City. The tiny kitten had been found with serious injuries and she was brought to a municipal shelter in Sandy, Utah.

Life could only get better for Tati, and that’s exactly what happened as soon as she arrived at Best Friends, where she got the medical attention she needed for her injuries and an unlimited supply of love in her foster home. Now Tati loves life so much that she wakes her adopter up every morning with licks when she’s ready to start the day. Why sleep in when you could be having fun?

A lover and a fighter

When the Best Friends medical team examined Tati, they found that in addition to an injured rear leg and hip, she had a luxating patella — a kneecap that doesn’t stay in its normal position. The best thing to do, the medical team decided, was to amputate Tati’s leg. This would help her get around much easier, so she could finally get on with life as the fun-loving kitten she hadn’t yet had the chance to be.

After Tati’s surgery, she went to stay with Megan McCloud, the lifesaving lead at the Best Friends Lifesaving Center in Salt Lake City. She would remain under Megan’s watchful eye while she healed.

It didn’t take much time at all for Tati to start feeling better after her surgery. On her first night at Megan’s place, Megan had to keep her in a cat tower because she kept trying to play with her fellow foster kitties. “She was always such a lover,” says Megan. “She never let anything get in the way of getting petted or playing.”

After about two weeks in her foster home, Tati was ready to head to the lifesaving center, where she met someone who decided to give her both a home and a best friend who would always be by her side. 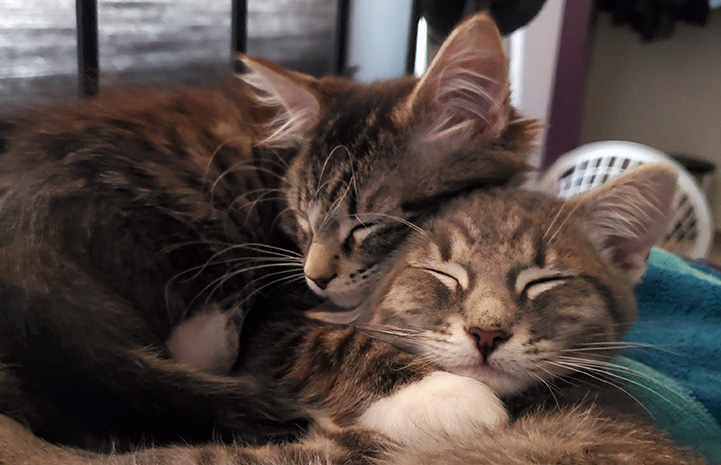 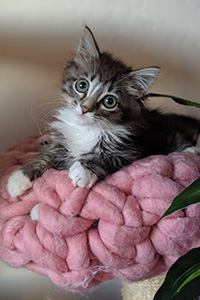 Elena Zerkle visited the center planning to adopt a kitten, and it didn’t take her long to decide who that would be. As soon as she started petting Tati, the kitten rested her little head on Elena’s hand. In that sweet moment, Elena knew she wanted to adopt Tati.

There was another kitten there, however, who captured Elena’s attention. Her name was Honeybear, and she was delightfully mischievous in the way that only kittens can be, and also very talkative and outgoing. Elena couldn’t choose between Tati and Honeybear, so she adopted them both. It turned out to be a brilliant idea.

Stronger than she looks

At first, Tati was a bit shy in her new home, but with some coaxing from Honeybear, she started playing and running around with her. Elena hardly notices that Tati does everything on three legs. “She has no issues with jumping down from anywhere or jumping onto anything that isn’t too tall,” says Elena. “And she easily climbs on the cat tree and into a hanging shoe organizer that I have in my closet.”

Today, Tati and Honeybear (now called Kikyo and Nyko) love to wake up Elena with purrs while gently pressing their faces against hers, which is a sure sign that life has come full circle for the kittens, and especially for little Tati. In fact, these days Tati feels comfortable enough to be herself, and she doesn’t hold back.

“She has no problem knocking my phone out of my hand when she wants attention and always comes to lie on top of me. She loves sleeping on my chest or next to me under my blanket,” says Elena. And Nyko likes to sleep on a pillow next to Elena’s head.

Elena says her two kittens have brightened up her life. There’s a new level of comfort around the house now, and Tati has taught her that looks can be deceiving. “She has shown me that even though she looks a bit more fragile, it definitely isn’t the case,” says Elena. “She is strong and very capable, just like any other cat.”

Adopt a kitten (or two!) near you 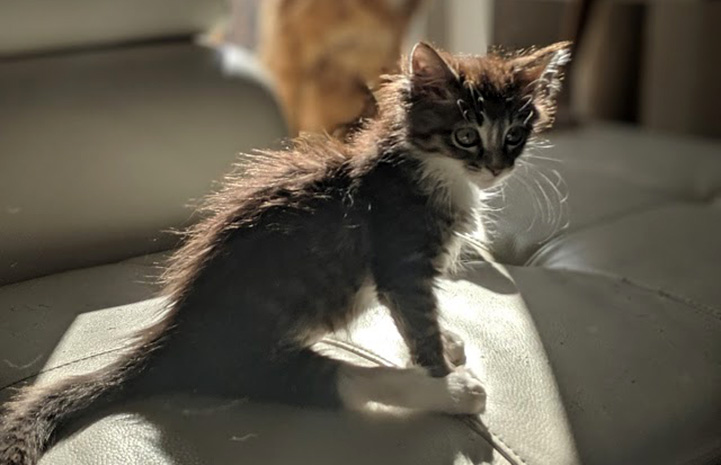