Image
Hundreds of cats are spayed or neutered as part of trap-neuter-return (TNR) effort in Tucson, Arizona, in Pima County.
By Best Friends staff

The couple from Tucson, Arizona, was like so many people who care for cats. They didn’t set out to have a colony of 18 in their backyard — it just sort of happened. It started with one cat who kept showing up near their house, and once the feeding began, more came. Then there were kittens, and soon they were feeding nearly 20 cats. Things were getting out of control. 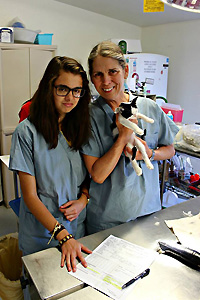 The Tucson program works closely with Pima Animal Care Center (PACC), the local municipal shelter, to spay or neuter dozens of cats and then return them to their neighborhoods. It’s an all-out effort to stop the flow of hundreds of kittens into the shelter each year. Programs similar to the one in Tucson are active in Philadelphia, Pennsylvania; Columbus, Georgia; and Baltimore, Maryland.

Slow and steady progress is essential to saving more cats in the long run, but sometimes the best way to get a handle on an exploding cat population in one area is to gather up and spay or neuter as many as possible over a couple days. Shelly Kotter, Best Friends cat initiatives manager, says, “We use this tactic in all our program cities because we can really blanket one area in the community and make a big impact quickly on that neighborhood.”

Every day counts when you’re managing a group of unfixed cats, and until every single one is spayed or neutered, it’s not a question of whether there will soon be kittens, but rather how many, and whether they will survive. And because the colony of 18 cats was just one of many in Tucson that needed help, Best Friends and local partners decided to conduct a two-day spay/neuter effort that would fix not only those 18, but more than 200 others around the city — all at no cost to caregivers.

A team effort to help cats

It was early on a Saturday morning when dozens of people from the Pima Animal Care Center and Best Friends, along with skilled local veterinarians and lots of volunteers, set up operations to spay or neuter as many cats as possible over a weekend.

People trapped and transported cats, greeted people who arrived with their own cats to be fixed, and helped watch over cats and kittens as they recovered from surgery. And thanks to effective advertising, once the word got out that the public could bring their own cats in for surgery, people responded in droves. 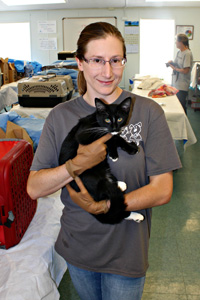 Karen Hollish, development director at PACC, says, “Because of our very small staff, we are not typically able to offer spay or neuter surgeries for the public’s pets. But over these two days, we were able to serve so many cats.”

That special group of 18 cats was among them. Dr. Carolyn Kenski, Best Friends community cat project coordinator, says, “We were able to trap, spay or neuter and return every single cat in the colony. The couple was so excited. They wished they’d reached out sooner. They didn’t realize it would be so easy.”

At the end of a very busy two days, through a massive team effort, nearly 250 Tucson cats were spayed or neutered, and safely returned to their homes. Best of all, those cats will stay happy and healthy — without producing any more kittens.

Learn more about the many ways we’re helping cats across the country.