Image
Dog with neurological disorder has a specialized training plan that helps him with his brain disorder symptoms and his tendency to fixate on things.
By Christelle L. Del Prete

Ever since he arrived at Best Friends Animal Sanctuary from a shelter in Indiana, Whistler has been getting some very special help at the Sanctuary. The handsome hound was born with a serious neurological condition that can turn even his simplest activity into a huge challenge. But Dogtown caregivers and behavior consultants have the know-how to help Whistler work through these issues. And while his daily routine is a little different from that of most other dogs, it’s a full and happy life that he enjoys.

Does a dog’s neurological disease cause frantic movement?

When he arrived at the Sanctuary, Whistler’s biggest challenge was controlling his seemingly random body movements. He would spin in circles and bounce up and down as if he were on a pogo stick. His caregivers knew that his constant, frantic movement must have been stressful and exhausting for him. What they didn’t know (at first) was if he could control it or if it was a direct effect of his condition, and therefore out of his control.

After carefully observing Whistler’s interactions with people and other dogs, Dogtown caregivers realized he could control his body movements and that he could learn from both people and other dogs. With lots of positive reinforcement (treats and praise), they taught Whistler to focus on them. And while he was concentrating on his caregivers, an amazing thing happened: His frantic movement stopped. Whistler could keep his body still.

Being able to control his body was a huge turning point. It was much less stressful for him to be around other dogs and people, which meant he could make friends with them. He could also go for walks on the Dogtown trails, which he loves. 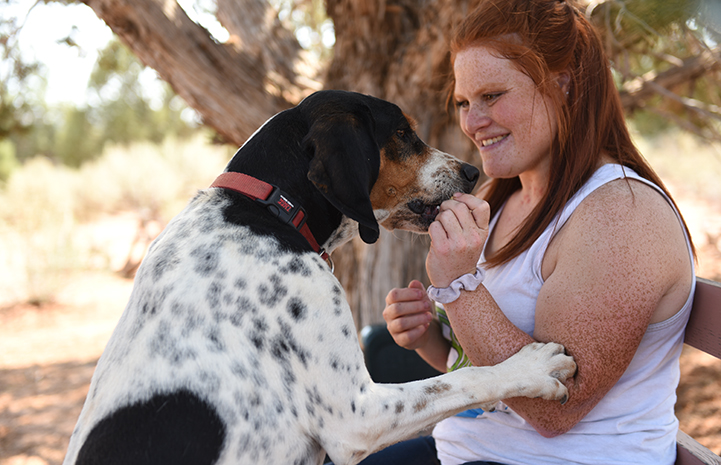 Because of his condition, however, more challenges were ahead. Whistler was able to focus and to keep his body in check, but sometimes his focus would run amok and turn into fixation. Then, he would get completely stuck during everyday activities — like a car with its tires spinning in mud.

One day, a leaf blew into Whistler’s room and landed in his metal water bucket. Whether it was the motion the leaf made by fluttering in the breeze on top of the water, or the reflection it cast on the wall, Whistler locked onto it immediately. He would not leave the water bucket alone and began to obsess over it.

When caregivers tried to enter his room to give him fresh water, he became upset, guarded his bucket, and charged at them so they wouldn’t take it away. It took a while for him to calm down, but patient caregivers finally convinced Whistler to go outside and the bucket was quickly changed.

While it’s difficult to anticipate problems like the one with the water bucket, Whistler’s triggers showed a predictable pattern. He started having a hard time leaving his room for walks because he was distracted by (and then fixated on) part of the door — so much that he refused to walk through the doorway. If caregivers tried to lure him out with treats, he'd fixate on them instead of the door, but still not make any progress going through the doorway. 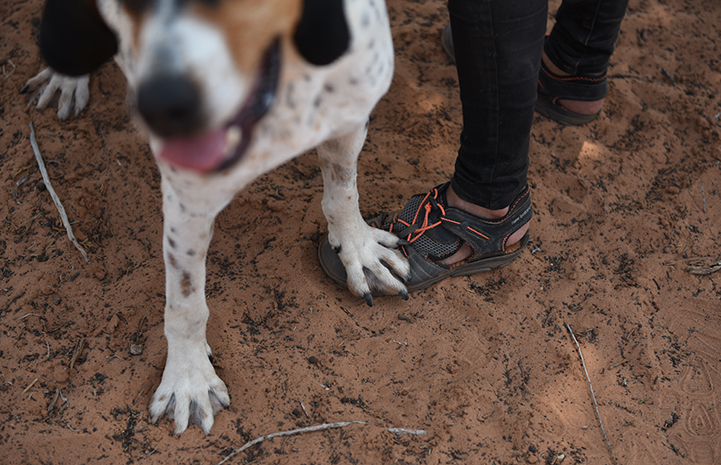 Suddenly, there was a huge hurdle between Whistler and his walks on the Dogtown trails.

So, Dogtown caregivers and behavior consultants came up with a daily training plan to help Whistler get leashed up and out of his yard, go for a walk, return to his yard and get unleashed. Though the plan had a simple goal — and the steps would be easy-peasy for most dogs — Whistler needed a lot of practice and positive reinforcement to master the new routine. 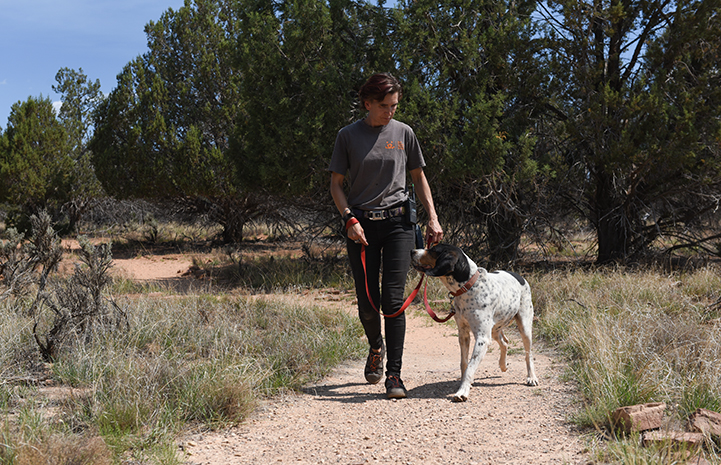 When it came time for his daily walk, caregivers would pair up. One person would act as Whistler’s handler, give him cues, leash and unleash him, while the other person was the lookout for potential roadblocks along Whistler’s path or signs that he was paying close attention to something other than his handler.

From inside the building, Whistler’s handler would ask him to go out and into an airlock area at the side gate of his yard. Then, Whistler would follow his caregiver to the corner of the airlock and receive a treat while waiting for the first gate to be opened. Around meant he could exit through the open gate and get a treat while he was leashed. Finally, Whistler and his handler would exit the gate and (along with the lookout) go for a walk.

A compass for navigating neurological challenges

Whistler is very treat-motivated, so any time he started to obsess over treat pouches, his caregivers would tell him “empty” and the dog knew it wasn’t a time for a treat. Following a similar process in reverse, Whistler would return to his yard, get unleashed after his outing and enjoy one more treat before resting.

Because the training plan has worked so well, Whistler is now able to enjoy his daily walks without getting “stuck in the mud” along the way. Of course, this doesn’t mean that there won’t ever be setbacks or that Whistler won’t face obstacles. What it does mean is that he now has a compass with which to navigate his neurological challenges and to enjoy life along the way. 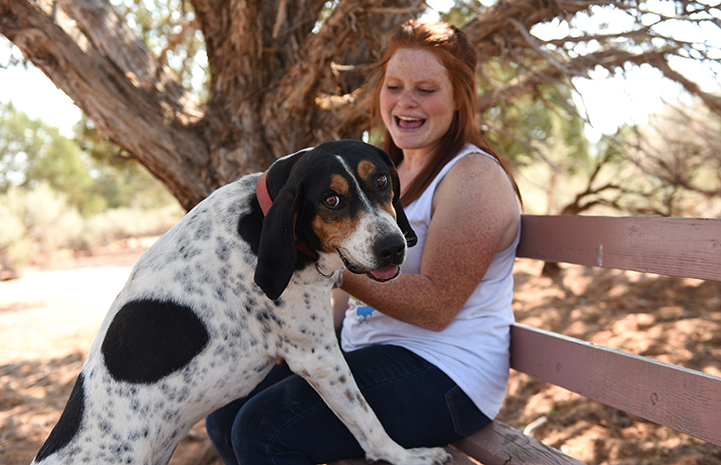