"It's all about Gallup … it’s about him 100 percent,” says local volunteer Lannie Yeager. The dog he is speaking about is a gorgeous, chocolate-brown Staffordshire terrier and Catahoula mix who is no stranger to tragedy. Gallup spent the first four years of his life in a crate, in a hoarding situation. Before he was rescued in early December of 2012, Gallup witnessed a horrible crime; after a 17-hour standoff with the police, his owner shot and killed the animal control officer who was attempting to save Gallup, five other dogs and two cats. Thanks to many people’s dedication, Gallup’s life is headed in a new — and much better — direction. 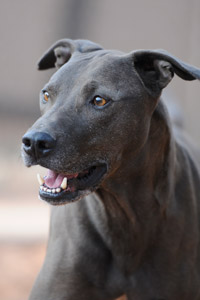 Immediately following the tragedy, the fallen officer’s widow and coworkers worked tirelessly to save the animals in honor of their fallen hero. They found placement for both of the cats and all of the dogs, except Gallup, who was the most scared and traumatized. They knew that he would need extra help, so they reached out to Best Friends, and Gallup came to the Sanctuary in mid-December. At that point, he was so nervous that it was hard for him to calm down or rest. His caregivers weren’t even sure how well he slept at night – or if he slept at all. He needed time – and some intensive rehabilitation and reassurance.

Gallup’s caregivers began using clicker training to help him gain focus and begin bonding with humans. The idea behind clicker training is simple: An animal will repeat a behavior for which he or she is rewarded. When Gallup performs a desired behavior, his caregivers use the clicker to “mark” that behavior and then reward him with a treat.

Intelligent and naturally curious, Gallup quickly learned how to make eye contact on cue and to touch people’s fingertips for a treat (a skill called “hand targeting”). With all of the love and encouragement, Gallup began to come out of his shell slowly. And then a very special volunteer stepped in to help him make some further strides toward that goal.

Lannie, who is retired, moved to Kanab, Utah, in January of this year. He met Gallup fortuitously, when he went to see a dog named Miss Prizzle, whom he had worked with when he volunteered at the Humane Society of Moab Valley. During Lannie’s visit, a Dogtown caregiver told him a few things about Gallup. Later, Lannie decided he would make Gallup his project dog.

Lannie now works with Gallup up to five times per week. He began slowly, trying to get to know the anxious dog by going into his run and taking him on walks. Most importantly, because Gallup always seemed so wound up, Lannie would take him into a back room for quiet times, so that Gallup could learn to calm down and take naps. Lannie’s goal was to help Gallup relax for longer and longer periods of time: from 15, to 20, and finally 30 minutes. During these times, Lannie would lie on the floor beside his new friend. Eventually, Gallup developed enough trust to rest his head on Lannie’s stomach during these quiet times. 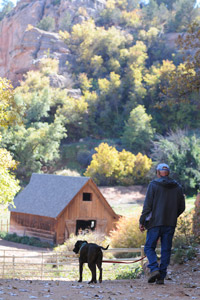 In April, Lannie finally coaxed Gallup into his car and started taking him on short adventures. Lannie drove Gallup to some of the quietest places at the Sanctuary, such as Angels Overlook and Angels Landing, and encouraged him to lie down in the grass. Lannie even took Gallup to the Welcome Center a few times; he walked right through the door and stayed for five minutes on his first visit, and 10 on his second. By mid-October, Gallup had had another breakthrough. While Lannie was driving, he heard a big sigh and turned to see that Gallup had not only curled up on the backseat, but had also fallen asleep. “That was a big day,” Lannie says.

Though Gallup is a smart dog, he is easily overwhelmed, so the training sessions must be kept very short. But, as Lannie likes to say, “Little steps are big steps,” and, with a dog like Gallup, every bit of progress is a huge success.

To adopt Gallup or another dog from Best Friends, go to the Adopt a Pet section of our website.